MNI: CANADA TO END SOME COVID PAYOUT PROGRAMS ON OCT. 23

VIEW: UBS: Will The RBA Join The Pack?

Nothing New From Lowe

The start of the week has been dominated by broader focus on the prospects of a sizeable fiscal support package in the U.S., with Treasury Secretary Yellen and President Biden continuing to push home the need for notable assistance for the economy (although it looks like minimum wage hikes will have to wait, at least for now). The continued moderation in U.S. COVID cases is also helping risk-positive flows, although worry re: the spread of the UK strain of the virus around the U.S., in addition to issues pertaining to the efficacy of the Oxford/AstraZeneca vaccine in combatting the South African strain of the virus may be limiting broader follow through. Elsewhere, Sino-U.S. tensions are not expected to ease any time soon, especially on the back of the rhetoric provided by U.S. President Biden & Secretary of State Blinken over the weekend, although they will likely be on a more predictable and less spontaneous trajectory than what was seen during Donald Trump's term. Ultimately, the U.S. Tsy curve has been subjected to some bear steepening on the aforementioned fiscal matters, with 30-Year yields threatening to break above 2.00%, cheapening by ~2.0bp on the day, while S&P 500 e-minis had a very brief, and very limited look above the 3,900 mark, tagging a fresh all-time high in the process. T-Notes last -0-03+ at 136-18+, hovering just off worst levels of the day, but sticking within Friday's range. 10-Year breakevens hit fresh cycle highs in Asia, aided by another uptick in crude oil futures. Fedspeak from Mester headlines a slim local docket on Monday, with focus already turning to this week's 3-, 10- & 30-Year Tsy supply.

There was little in the way of generic direction in the net positioning among non-commercial U.S. Tsy market players in the week to 02 Feb, with the details outlined below. 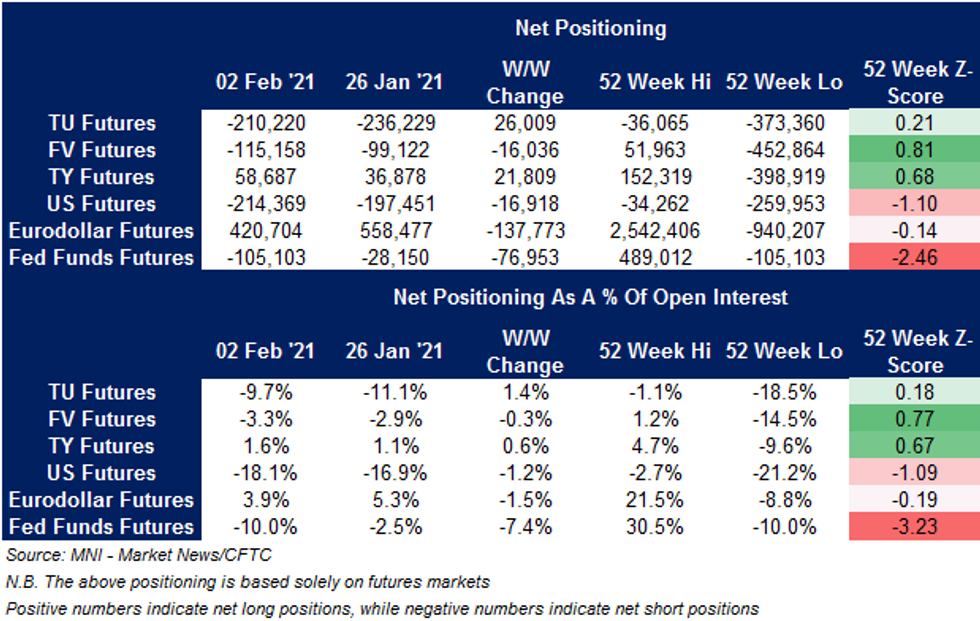 Cautious optimism took hold in early trade this week as participants scrutinised weekend comments from U.S. Tsy Sec Yellen, who kept pushing for a sizeable Covid-19 stimulus package. The Antipodeans caught a light bid, even though a lack of major headlines kept G10 crosses rangebound. New Zealand observed a public holiday. AUD/JPY topped Y81.00 for the first time since 2018. Meanwhile, AUD/USD trades at $0.7674 at typing, ahead of the expiry of $1.0bn worth of options with strikes at $0.7650.

A mixed session for Asia FX, the greenback held most of its losses from Friday while positive comments surrounding US stimulus efforts helped engender a broad risk on tone. Volumes have been reduced as market participants prepare for the LNY holiday, with several market closures in the region.

ASIA RATES: Broad Risk On Tone Pressures Most Bonds In The Region

The start of the week has been dominated by broader focus on the prospects of a sizeable fiscal support package in the U.S., with Treasury Secretary Yellen and President Biden continuing to push home the need for notable assistance for the economy. This has spurred risk sentiment and weighed on bonds worldwide.

EQUITIES: Positive Sentiment Spills Over From US

Asia-Pac equities are in positive territory to start the week, most major indices are in the green led by indices in Japan where the Nikkei 225 has gained over 2%.

A softer USD (as measured by the broader DXY) has supported bullion since the final Asia-Pac session of last week, even with longer dated U.S. real yields ticking higher, although the stabilisation/marginal uptick for the DXY during the early rounds of a new week of trade have kept a lid on bullion over the last few hours. Spot last deals little changed, just above $1,810/oz.

The rally continues, crude futures are higher in Asia to kick off the week; WTI and Brent both added ~$0.60, with the latter having a brief foray above the $60.00 mark. 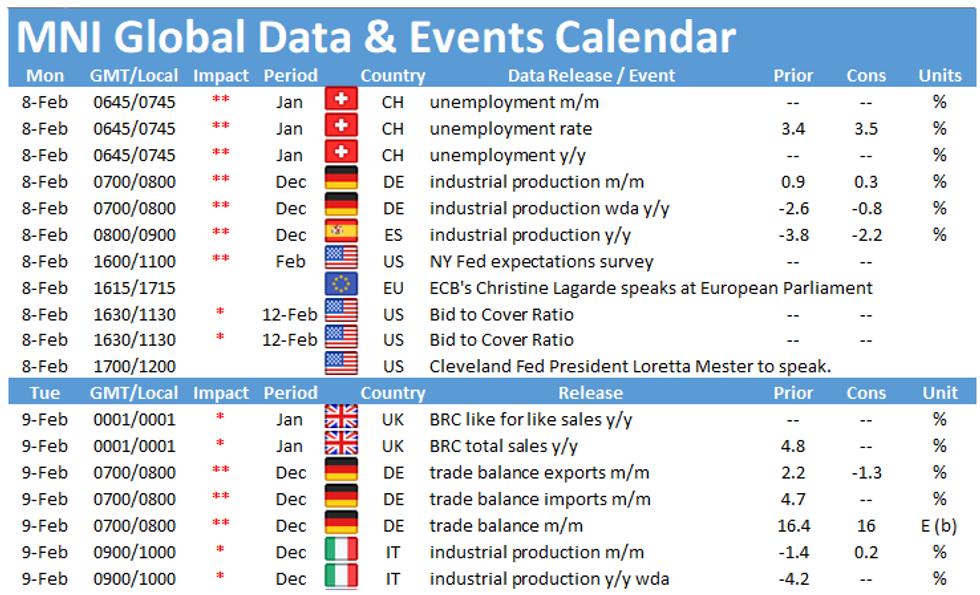