BMO Eying 5-Year Supply For "Market Lean" Ahead Of Powell

BoK Growth Forecast Could Be At Risk

MNI EUROPEAN MARKETS ANALYSIS:  Markets Steady Ahead Of The Weekend

BOND SUMMARY: Plenty To Note Moving Into The Weekend

The latest fiscal headlines from the U.S. pointing to an agreement between a bipartisan group of Senators re: infrastructure have done little for the market, with the blessing of both party leaderships still required and questions from the White House emerging (although the latter has expressed a willingness to work with the group). T-Notes have stuck to a 0-04 range overnight dealing just off of best levels at typing, last +0-04+ at 133-02+ on decent enough volume of just over 103K, with cash Tsys trading roughly 0.5-1.0bp cheaper across the curve. Flow was headlined by a 5.0K block seller of FVU1.

The Antipodeans sold off in muted Asia-Pac trade, which saw little in the way of notable headline catalysts. JPY also landed near the bottom of the G10 pile, while the greenback seemed poised for its first weekly loss this month.

US yields fell and the greenback moved lower in the wake of US CPI data yesterday, news flow was light with holiday's in the region next week.

Equity markets in the Asia-Pac region are mixed with moves in either direction muted. Bourses in Japan and mainland China are lower while Hong Kong, Taiwan and South Korea are higher, the latter after strong export data. Australia also seeing some gains with iron ore higher. In the US futures are marginally higher with markets still digesting yesterday's jump in US inflation and assessing just how much is transitory.

Oil is lower in Asia-Pac trade on Friday, with WTI & Brent sitting ~$0.25 below their respective settlement levels. Still, there are positive demand cues with an OPEC+ report on Thursday predicting demand will rise by around 5m bpd in the second half of 2021, while estimates of spare capacity could be lowered. 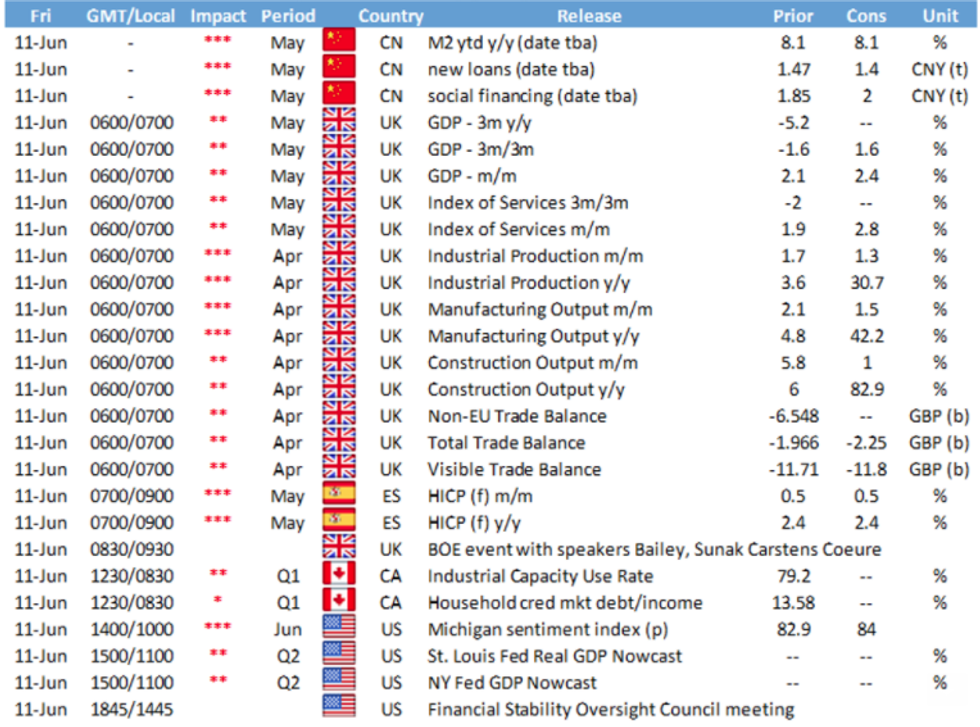