It has been a quiet Asia-Pac session in terms of broader news flow. We didn't see much to drive the recent bid in the U.S. Tsy space, but e-minis traded off best levels, with Bitcoin trading back below $30,000 for the first time since late June. We are always cautious when pointing to direct correlations with cryptocurrencies, but that could be at least a partial driver here. Also, the bid in the ACGB space could be providing another (modest) leg of support. T-Notes last -0-03+ at 134-18+, after tagging best levels of 134-21, once again operating on healthy volume of ~135K. The cash curve has twist steepened around the 7-Year point of the curve.

Plenty of commentary out there today re: the second largest round of monthly JGB purchases by foreigners on record during June, totalling a net ~Y4.06tn (per JSDA data). This shouldn't come as any surprise, with the data pointing to most of the demand coming in the 2- to 5-Year zone of the curve. We had previously flagged that foreigners were likely driving the bid in the space at this time, using x-ccy basis swaps to extract positive yields from the space, despite the outright negative yields in play in that zone of the curve.

Asia-Pac equity benchmarks retreated on a negative lead from Wall Street and the PBOC's decision to refrain from cutting its LPRs, which put a bid into the yen, even as U.S. e-mini futures edged higher. JPY gained despite the fact that it is a Gotobi Day in Japan, blipping higher as e-minis trimmed some of their prior advance.

Another risk off session sees most Asia EM currencies under pressure. Several markets closed for public holiday's including Indonesia, Malaysia, Philippines and Singapore.

EQUITIES: Another Negative Day In Asia

Another negative day for equities in the Asia-Pac region, though moves are not as dramatic as yesterday there is still a broad risk off tone on concerns over the delta variant. In mainland China indices are lower by around 0.6%, the PBOC opted to keep LPR rates on hold despite some speculation of a cut. In Japan markets are down around 0.9%, CPI rose 0.2%, in line with estimates, though coronavirus concerns weigh. In the US futures are higher, rebounding from a sharp sell off yesterday. US futures are higher by 0.1-0.3%, S&P e-minis need to overcome support turned resistance at 4279.25, the low from July 8.

GOLD: Holding Between The Lines

Gold continues to trade within the well-defined technical parameters, with spot last dealing little changed around the $1,820/oz mark. Monday saw the yellow metal briefly show below $1,800/oz before the DXY pulled back from fresh multi-month highs, allowing gold to recover. Initial lines in the sand come in the form of the Jul 12 low/key near-term support ($1,791.7/oz) and the July 15 high/bull trigger ($1,834.1/oz). U.S. Tsy yield and USD dynamics remain key, as ever.

Crude futures have paused their decline for now after plunging on Monday; with WTI & Brent dealing ~$0.15 above their respective settlement levels at typing. After a failed deal at last month's meeting sent oil markets through an acute spell of strength, OPEC+ finally struck an out-of-cycle agreement to turn on an extra 400,000bpd of extra supply every month from August onwards. This boost to supply met soggy demand for growth proxies as equities globally sank sharply. This manifested in a near-8% slide for WTI crude futures, the sharpest decline since the market-breaking drop into negative territory last year. WTI crude futures now eye support at the $66.02/bbl 100-dma, with the June rally in prices now all but erased. Sentiment has been broadly negative in the Asia time zone over concerns around the delta variant of COVID-19. 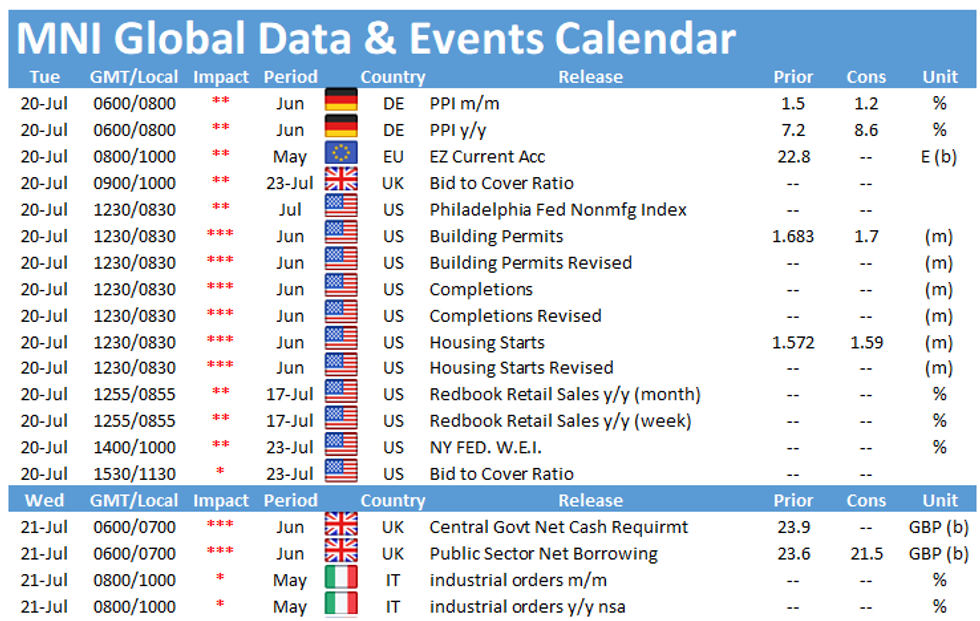