A fresh multi-decade high for the Nikkei 225 helped apply modest pressure to U.S. Tsys during early Asia-Pac dealing, with some feedthrough from the Aussie bond space also evident. A couple of pockets of TY screen selling added to the downward pressure, although the contract stuck to a 0-05 range, recovering from worst levels as ACGBs turned bid to last trade -0-03 at 133-06+. Meanwhile, cash Tsys trade little changed to ~1.0bp cheaper on the day, with 5s underperforming. The latest round of U.S. CPI data dominates the NY docket on Tuesday.

AUD sold off as RBA Gov Lowe delivered a speech on "Delta, the Economy and Monetary Policy," in which he downplayed market pricing pointing to a rate hike in '22 & '23, reaffirming the Bank's well-trodden guidance. A BBG trader source suggested that short-term accounts initiated AUD/USD shorts in the lead-up to Lowe's address.

ASIA FX: KRW Leads Gains Ahead Of Chuseok Holiday, With Covid Cases Below 1,500

KRW and PHP outperformed in Asia as participants assessed the state of play on the Covid-19 front, amid talk of South Korean exporters selling the greenback ahead of a local holiday.

The Nikkei 225 tagged fresh multi-decade highs on Tuesday, benefitting from positive reports surrounding the domestic COVID vaccine drive in Japan and expectations surrounding post-election stimulus. Elsewhere, it was China Evergrande that continued to steal the headlines, with the giant property developer flagging further risks and headwinds to company operations, while it confirmed that it has hired restructuring advisors to explore avenues out of its multitude of problems. The CSI 300 and Hang Seng both trade a little below unchanged levels. U.S. e-minis added incrementally to Monday's rally. Participants are zeroed in on Tuesday's U.S. CPI print.

Gold has meandered through the early rounds of trade this week, with spot continuing to print around $1,790/oz. That leaves the technical overlay as it was, with firm support at the Aug 19 low ($1,774.5/oz), while firm resistance is located at the July 15 high ($1,834.1/oz). Tuesday's U.S. CPI print provides the next notable input for participants.

WTI & Brent futures have added ~$0.40 to settlement levels, building on 2 sessions of gains. Monday's rally was aided by the continued issues re: getting U.S. Gulf supply back online in the wake of hurricane Ida, with a bullish sell-side note from Goldman Sachs no doubt helping the bid. The U.S. Gulf dynamic is feeding into the tight supply mantra, and the impact on prices was compounded by the latest OPEC report, released Monday, which revealed an uptick in the cartel's global demand forecasts. The latest round of weekly API crude inventory estimates will headline on Tuesday. 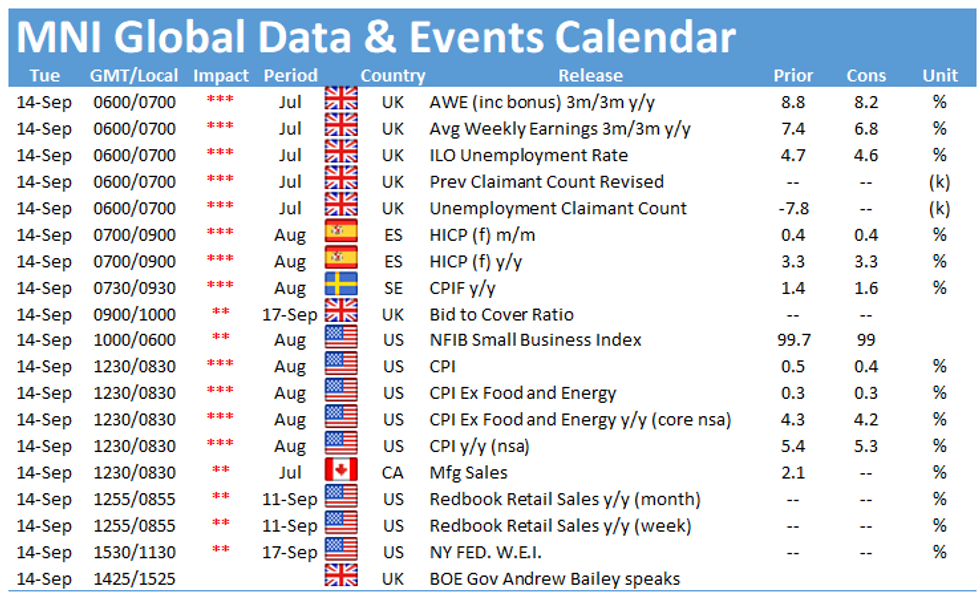