Coming up in the Asia-Pac session on Thursday:

Coming up in the Asia-Pac session on Thursday: 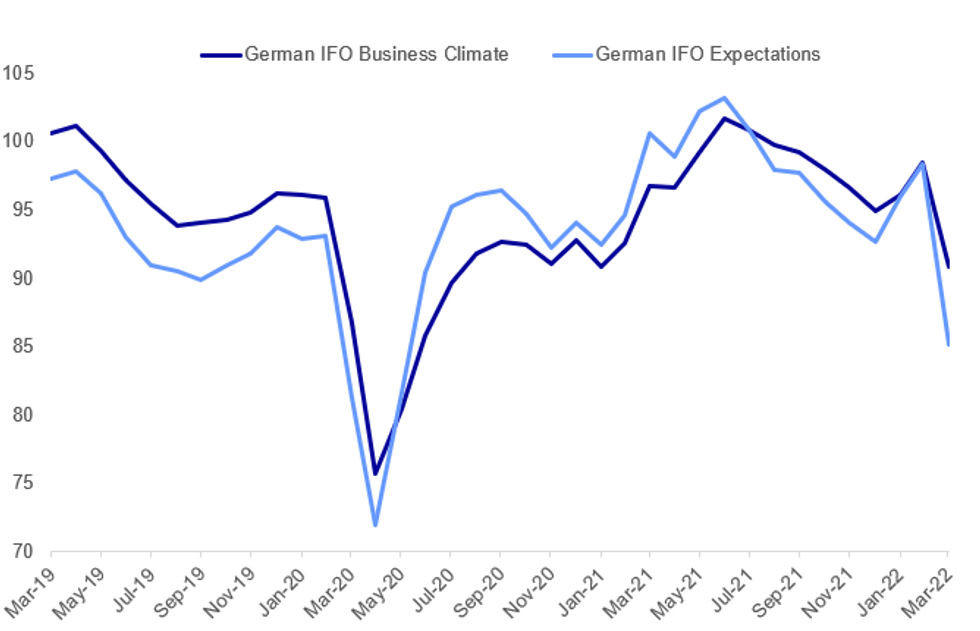 US / EU / ENERGY / RUSSIA (BBG): A political deal between President Joe Biden and the European Union will pave the way for additional imports of liquefied natural gas from the U.S. to help the bloc replace Russian imports of the fuel, a senior EU official said. Biden, who joined EU leaders at a summit in a bid to showcase a common resolve against the Russian invasion of Ukraine, will announce the agreement together with European Commission President Ursula von der Leyen on Friday morning, according to the official. LNG imports from Russia, the EU’s biggest energy supplier, stood at around 14 billion to 18 billion cubic meters annually in the past years. “We are taking further, concrete steps in our energy cooperation to ensure the security of supply and to reduce dependence on Russian fossil fuels,” Biden and von der Leyen said in a joint statement late on Thursday in Brussels.

GERMANY / ENERGY (BBG): Germany is aiming to almost completely halt imports of Russian gas by the middle of 2024 after broadly ending purchases of the nation’s oil and coal already this year. “In recent weeks, we have made intensive efforts together with all relevant players to import fewer fossil fuels from Russia and to put supply on a broader footing,” Economy Minister Robert Habeck said Friday in an emailed statement. “The first important milestones have been reached in order to free ourselves from the grip of Russian imports,” he added.

GERMAN IFO (BBG): German business confidence plunged to the lowest level since the early months of the pandemic after Russia’s invasion of Ukraine clouded the outlook and caused energy prices to soar. A business-expectations gauge compiled by the Munich-based Ifo Institute fell to 85.1 in March -- more than all but one of 27 economists predicted in a Bloomberg survey and the worst reading since May 2020.Separate data this week from the European Commission showed a similar slump in consumer sentiment across the 19-member euro zone. “Sentiment in the German economy has collapsed,” Ifo President Clemens Fuest said Friday in a statement. “Companies in Germany are expecting tough times.”

ITALY CONFIDENCE (BBG): Confidence among Italian businesses and consumers fell sharply on concerns about the economic consequences of Russia’s invasion of Ukraine. The economic sentiment index fell to 105.4 in March from a revised 107.9 in February, statistics office Istat said Friday. Measures of consumer and manufacturing confidence both declined, with the former reaching its lowest level since January 2021.Finance Minister Daniele Franco said this week that Italy’s economic growth is set for a potentially significant downgrade because of the war, which is adding to energy-price inflation and supply disruptions. The European Commission currently forecasts expansion this year of 4.1%.

U.S.-E.U./TECH (DJ): The U.S. and the European Union reached a preliminary deal on controlling how digital data moves between their two markets, European Commission President Ursula von der Leyen said Friday. The deal, if concluded, could resolve one of the thorniest outstanding issues between the two economic giants and assuage concerns of companies with operations on both sides of the Atlantic. An earlier deal regulating trans-Atlantic data flows was deemed illegal by the EU's top court in 2020.Officials and observers on both sides of the Atlantic expect any new deal to be challenged in court again.

JAPAN: Japan's government upgraded its assessment on corporate profits for the first time since August 2021, but left its main economic assessment mostly unchanged from the previous month, though it voiced concern on the impact of pandemic curbs, the Cabinet Office said on Friday.

Supermarket sales declined by 0.2% last month, extending a 1.6% plunge in January, the fourth straight decline. That takes food sales 0.1% below pre-pandemic levels. The ONS noted falls in alcohol and tobacco sales, suggesting more people are now eating and drinking outside the home.

Non-food sales rose by 0.6%, lifted by a 13.2% surge in clothing sales, as consumers return to offices and grow more comfortable socialising. Department store sales increased by 1.3%. However, household goods sales declined by 2.5%, while other store sales fell by 7.0%. Petrol sales rose by 3.6%, taking transactions 0.9% above pre-pandemic levels for the first time since February of 2020. The survey period ran through Feb 26, the ONS said.

Core fixed income is drifting higher this morning with gilts the outperformers. Indeed, Treasuries and Bunds remain within yesterday's ranges at the time of writing but gilts have broken above to the highest levels since Monday.