MNI US Open: Stocks Up, Oil Down As A Big Week Begins 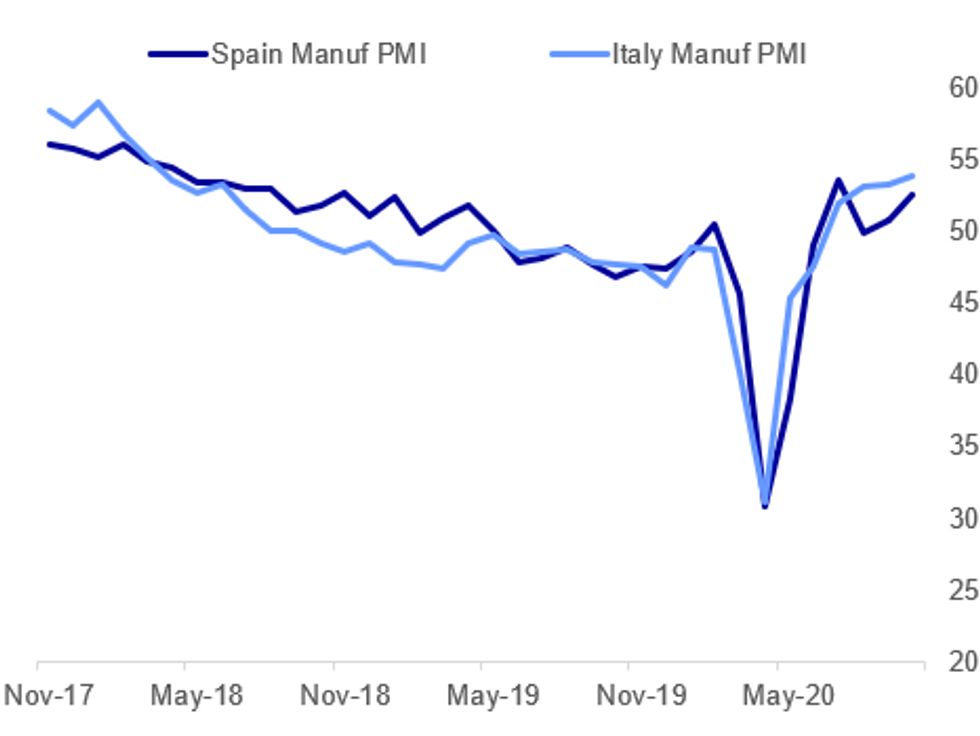 SPAIN DATA: Interesting from Spain PMI press release, looks as though firms looking through short-term case rises "expectations for output over the coming 12 months strengthened in October, with confidence reaching its highest level since February. Positive sentiment was linked to hopes that COVID-19 will have been brought fully under control by this time next year, and that a strong economic recovery will be under way. "

EUROZONE DATA (IHS MARKIT): The IHS Markit Eurozone Manufacturing PMI® indicated a further improvement in manufacturing sector growth during October. After accounting for seasonal factors, the headline index moved up to 54.8, from 53.7 in September and better than the earlier flash reading. October's number was also the best recorded by the survey for 27 months and maintained the current run of continuous growth that began in July.

UK DATA (IHS MARKIT): The recovery in the UK manufacturing sector continued at the start of the final quarter, as output and new orders rose again supported by improved demand from both domestic and overseas sources. That said, the upturn showed further signs of losing impetus, as the initial boost to growth from the economy reopening faded and job losses accelerated.The seasonally adjusted IHS Markit/CIPS Purchasing Managers' Index® (PMI®) fell to 53.7 in October, down from54.1 in September but above the earlier flash estimate of53.3. The PMI has remained at an above-50.0 level, signalling expansion, for five months running.

OIL (BBG): Oil kicked off what promises to be a turbulent week of trading by plunging to a five-month low as a continued increase in Libyan crude production coincided with a wave of new virus-lockdown measures in Europe. The double whammy of falling demand and growing supply pushed futures in New York down as much as 6% in Asian trading. That could be just the curtain raiser for price action as Americans head to the polls on Tuesday in an election set to have far-reaching consequences for battered financial markets.

CHINA: China will need another five years of fiscal stimulus to overcome the hit from the Covid-19 pandemic to global trade, a high-ranking advisor to fiscal authorities told MNI in an interview in which he also said the government may consider new taxes on booming digital industries and should shoulder a greater share of the spending burden rather than relying on heavily-indebted local administrations. For full article contact sales@marketnews.com

CFTC: CoT Data Shows Markets Favoured MXN, Dropped GBP in Most Recent Week
Friday's CFTC CoT update shows speculators built MXN & trimmed GBP positions in the latest week of data. MXN saw the most sizeable change, with markets adding a net of 8k contracts,representing a 6.3 percentage point swing higher in the net long. GBP positions moved in the opposite direction, with GBP now at a near 7k netshort position as speculators trimmed positions by close to 5k contracts. Both NZD and CHF net positions remain close to their 52w highs at 17.3% and29.4% of open interest respectively.

EQUITIES (BBG): Institutional investors are buying Ant Group Co.'s Hong Kong shares before this week's debut at a premium to the listing price.Some trades were executed for HK$120 apiece in gray-market trading Monday, according to people familiar with the matter. That's 50% higher than the listing price of HK$80. The people declined to be identified as they are not authorized to speak to the media.

It's a blockbuster week with the US election as well as FOMC and BOE MPC policy decisions.

Equities trade on a more solid footing early Monday. Stock markets in Europe are higher by 0.8-1.5% while the E-mini S&P is higher by 40 points or so. Currencies are broadly non-directional, with the USD index inside last week's range, although the haven JPY is a touch weaker. CAD, NZD outperform slightly.

GBP was softer from the off, with the currency underperforming all others in G10 at the NY crossover following the announcement of a month-long lockdown effective Thursday to run until the beginning of December. While the move mimics others seen in France & Germany, Monday's GBP moves clearly show a lockdown wasn't seen as a done deal in the UK. GBP/USD bottomed out at 1.2855 this morning, the lowest since October 7th.

A strong start to a busy week for equities, with 'work from home' sectors outperforming in the wake of COVID lockdowns spreading.

Oil continues to fall, underperforming on both supply and demand concerns. 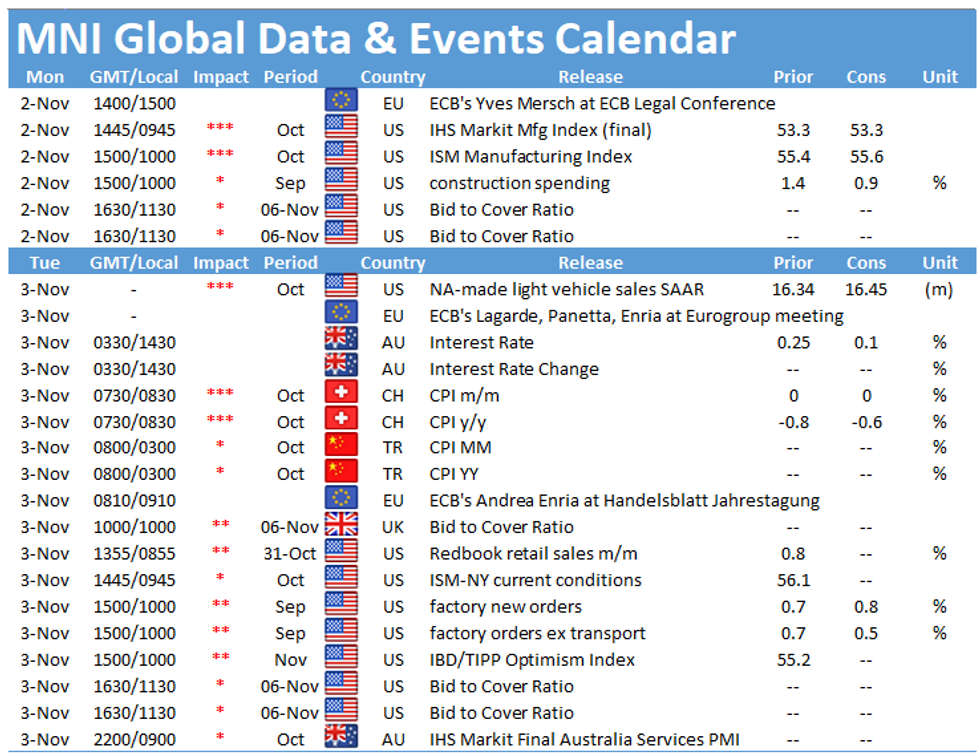