U.S.: President Donald Trump's chances of re-election gained sharply overnight in online betting markets as Americans head to the polls on Tuesday, according to Betfair Exchange. Trump's odds of winning the election improved to 39% from 35% on the UK-based platform, while former vice-president and Democratic challenger Joe Biden saw his chances dip to 61% from 65%.The election is on track to be by far the biggest betting event on record, with 300 million pounds ($389 million) bet so far, Betfair said. It accepts bets right up until the result is announced and sees bets with it to hit the 400 million pound mark, double that of 2016.Betters on British exchange Smarkets give Trump a 38% winning chance.

MNI FED (+ US ELECTION) PREVIEW: The November FOMC meeting is considered largely a placeholder for action at the December FOMC or beyond, but the Nov. 3 presidential and congressional elections could significantly alter the FOMC's outlook on monetary stimulus requirements. So for this meeting preview, we have decided to add in sell-side election previews, including (where applicable) what it will mean for the Fed outlook – including implications for fiscal policy and rates/Tsys [see pages 5-6 in PDF for our summary table, and pages 11-19 for summarized notes]. Additionally, if the situation warrants, we will circulate a brief update prior to Thursday's FOMC decision, with any changes to sell-side views spurred by the election outcome. CLICK HERE FOR FULL PDF PREVIEW or contact sales@marketnews.com

MNI US ELECTION NIGHT VIEWER'S GUIDE: In this publication we provide an estimated timetable of events for the US general election taking place on Tuesday 3 November as ballots are counted. As well as a guide of what times various states may call their results, we also provide analysis on key counties to watch in swing states that are likely to give the best indication as to the direction the presidency is heading in. CLICK HERE FOR FULL PDF or contact sales@marketnews.com

R.B.A.: The Reserve Bank of Australia has more monetary policy firepower to deploy if needed, even after the launch of a quantitative easing program and a rate cut, Governor Philip Lowe said Tuesday. Speaking after announcing an AUD100 billion QE program and a 15bps cut in official rates to a record low 0.10%, Lowe said future options include "further liquidity provision, asset purchases, and transactions in the foreign exchange market." However, he though the central bank had "gone as far as it makes sense to go" and reiterated that negative rates in Australia were "extraordinarily unlikely" although he did not rule them out.

EUROPE: Eurogroup finance ministers are 'likely' to issue a statement on the impact of new lockdown restrictions on the zone's economic situation and on the need for fiscal policy makers to remain alert to developments, MNI understands. One EU source said that, while a statement is 'likely', but added it would "depend how the discussion goes". Another said that if a statement was issued, he didn't expect it to go 'up a gear much' beyond the call at the last meeting for national fiscal polices to stay 'agile and flexible'.

E.C.B.: Banks must be prepared for the impact of the coronavirus pandemic before it shows up on their balance sheets, Andrea Enria, chair of the European Central Bank's banking Supervisory Board said Tuesday, as he repeated calls for a euro area bad bank to deal with the likely rise in non-performing loans. Anecdotal evidence suggests only a small fraction of borrowers are currently showing signs of distress, Enria said, but with Covid-19 infections on the rise the macroeconomic outlook is "fraught with uncertainty."

FIXED INCOME: Better selling has been the trend

The dollar is uniformly weaker on election day, with the greenback sliding sharply as global equities rally alongside Treasury yields. With polling booths due to open, early voting indications are for particularly high turnout, with markets appearing to price further the chances of a Biden victory as the results trickle through after the close. Betting markets look slightly more contentious, with Biden holding an implied chance of around 60% of victory.

AUD initially underperformed, sliding against all others in G10 as markets responded to the RBA's rate cut and expansion of stimulus. The Bank coupled the trimming of rates to 0.1% with a further A$100bln in bond buys, and tweaked forward guidance to indicate no rise in rates for the coming three years. AUD/USD was sold down to $0.7028, but the subsequent USD drop prompted a 1 cent rally in the pair ahead of NY hours.

The data calendar is of little consequence, with just a speech from ECB's Knot on the speaker slate.

Oil prices are on the front foot, as risk appetite builds ahead of the US election results. 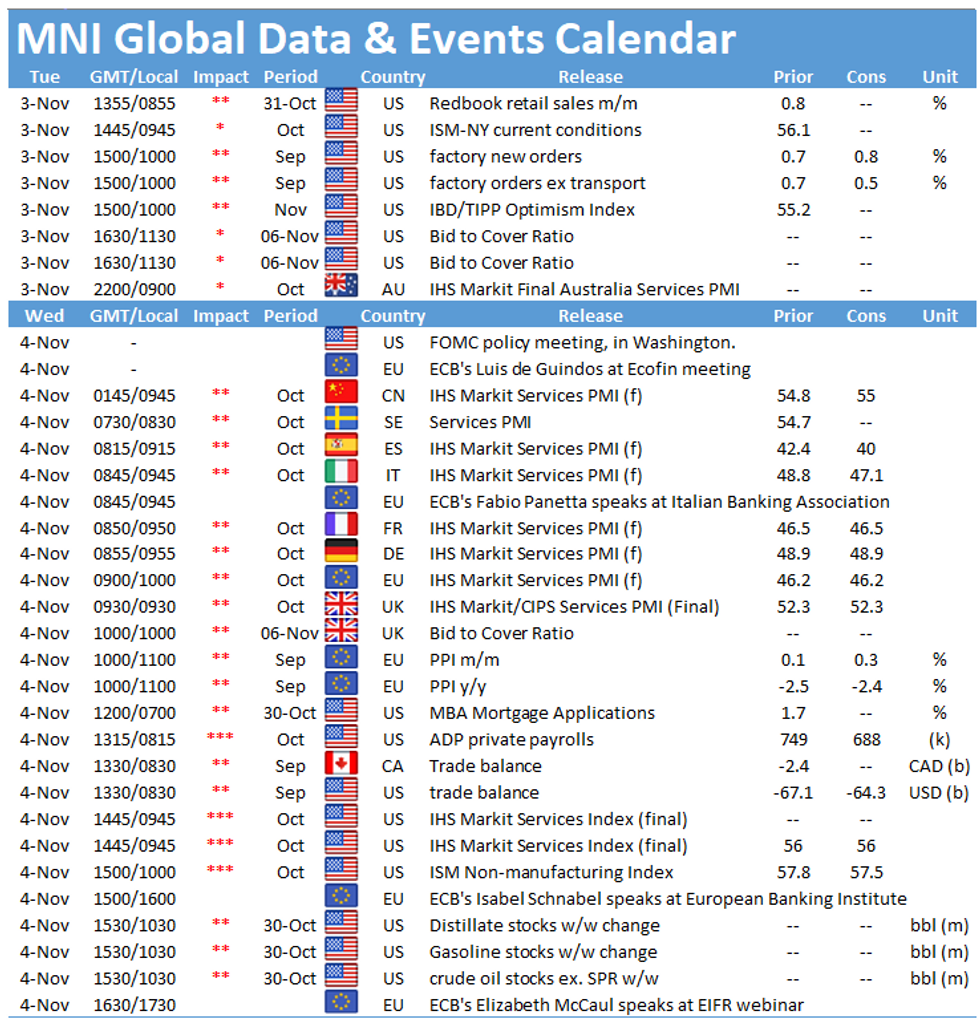