NGEU and US PPI the highlights today

MNI US Open: Focus On European Supply (Vaccines And Bonds) 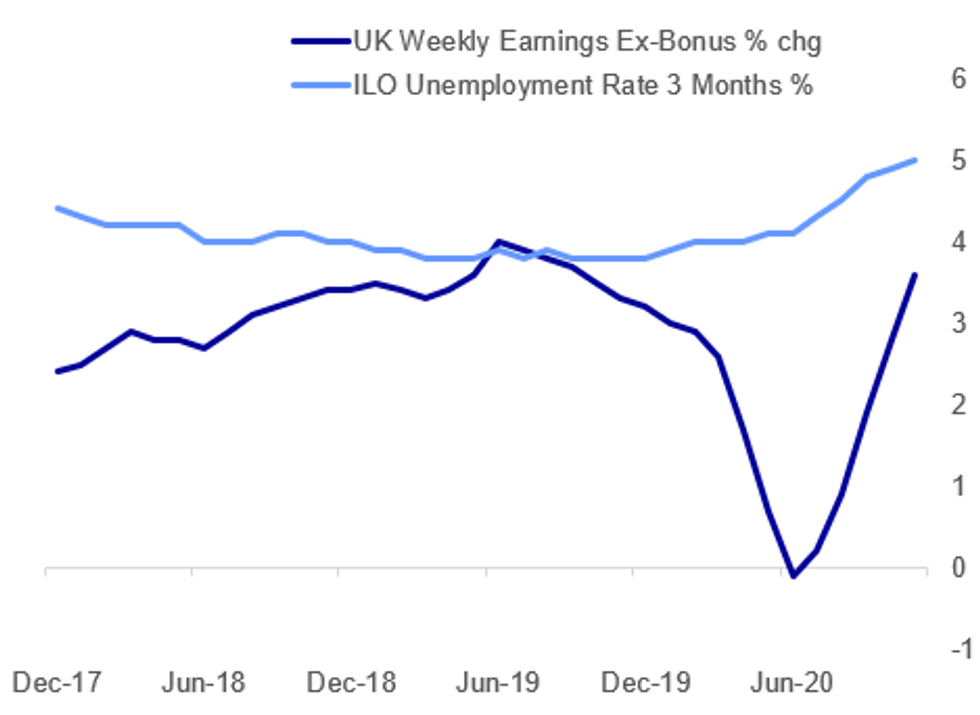 GERMANY/COVID: Alex Wickham at Politico tweets: "The German Health Ministry has DENIED the Handelsblatt report claiming the AstraZeneca had only 8% efficacy for over-65s. They say there has been confusion and 8% actually refers to the number of people in the study between 56 and 69 years old." The denial comes after a bombshell article from German outlet Handelsblatt last night, which claimed that according to a German Health Ministry study, the AstraZeneca/Oxford University COVID-19 vaccine was only 8% effective for the over-65's. This sparked immediate and angry rebukes from AstraZeneca as well as the UK gov't. Politico this morning quotes a 'Whitehall insider' accusing the German press of 'Russian-style disinformation'.

E.U./COVID (RTRS): Manufacturers of COVID-19 vaccines must honour their delivery obligations, European Commission President Ursula von der Leyen said, adding that Brussels would establish a mechanism to monitor vaccine exports from the bloc.Astrazeneca told the EU last week that it could not meet agreed supply targets by the end of March."Europe invested billions to help develop the world's first COVID19 vaccines. To create a truly global common good. And now, the companies must deliver. They must honour their obligations," the head of the EU executive said at a virtual meeting of the World Economic Forum."This is why we will set up a vaccine export transparency mechanism. Europe is determined to contribute. But it also means business," von der Leyen added.

ITALY (PTI): Italian Premier Giuseppe Conte was meeting Tuesday with his cabinet before heading to the presidential palace to offer his resignation after a key coalition ally pulled his party's support over Conte's handling of the coronavirus pandemic.Conte is hoping to get President Sergio Mattarella's support for forming a new coalition government that can steer the country through the pandemic, economic recession and a spending plan for 209 billion euros in European Union recovery funds.

MNI FED PREVIEW: The main talking point for Federal Reserve watchers in January has been the Fed's tapering intentions, and expectations for the timing of a taper are beginning to subtly shift forward. We have seen sell-side analysts increasingly eye end-2021 for a potential taper alongside upgrades to inflation and growth forecasts since the beginning of the year. And some FOMC participants have openly speculated that a taper by end-2021 is possible. But Chair Powell and other key Fed members have batted away speculation of such an early taper, and absent extraordinary upside surprises in the labor market and inflation, the Fed will almost certainly remain cautious on tapering for the next few FOMC meetings at least. For full preview please see the following link: https://marketnews.com/mni-fed-preview-january-202...

UK DATA: Employment rose in December for the first time since Covid-19 ravaged the economy, but redundancies also hit a record high, providing further evidence of the split in UK employment, with lower-paid jobs most likely to be cut, data released on Tuesday by the Office for National Statistics showed. Employment picked up by 52,000 between November and December, according to PAYE data compiled by HMRC, leaving employment down by 828,000 since March and by 793,000 over the same period of last year. This RTI series is derived from average job losses over the calendar month. That is the first rise since February, although the series has been subject to heavy revision; employment fell by a revised 57,000 in November, compared to the originally-reported 28,000 drop. According to the Labour Force Survey, employment declined by 88,000 in the three months to November, better than the forecast of a 104,000 fall, and the smallest three-month decline since the start of the pandemic. That lifted the unemployment rate to 5.0%, the highest since the three months to August 2016, although analysts expected a larger rise to 5.1%.

EUROPE BOND ISSUANCE (BBG): Europe's primary bond market is set for a record month for public-sector deals, after the European Union extended a Covid-stoked flood of government and agency issuance. The trade bloc will price 14 billion euros ($17 billion) of notes on Tuesday in a two-part deal under an employment program known as Sure. The social bonds will help push Europe's syndicated public-sector sales for the month to about 124 billion euros, exceeding April's record of 122.9 billion euros, according to data compiled by Bloomberg.

BOJ: Japan's fiscal situation is 'extremely severe' and the government needs to ensure sustainability, Bank of Japan Governor Haruhiko Kuroda told lawmakers on Tuesday. However, Kuroda again underlined that the central bank continues to buy huge amounts of JGBs, but the purchases are aimed at achieving the 2% price target and aren't fiscal financing.

GERMANY: Germany's exports improved in January, with the Ifo Institute's export index rising to 6.0, up from 1.9 in December, indicating increased optimism at the start of the year. This marks the highest level since October, with the uptick mainly driven by more clarity regarding Brexit, U.S. elections, a robust industrial economy and the start of the vaccination campaigns.

After yesterday's risk-off moves, we have retraced around a quarter to a third of yesterday's move higher in core fixed income. Equities have also moved to the front foot.

The greenback is the strongest performer in G10 early Tuesday, but progress is slow. EUR/USD came under early pressure, touching new weekly lows of $1.2108, but the pair has recovered since. Italian political wrangling continues to garner focus, with the Italian PM Conte today handing in his resignation in an attempt to kickstart the process of negotiating support for a new coalition.

Despite the Italian uncertainty, EUR is faring well, rising against most others. NZD also trades well, with the currency seeing some support on the back of an MNI interview with RBNZ former Chief Economist, who said he sees the RBNZ tapering their QE programme this year.

Focus today turns to US consumer confidence numbers for January and speeches scheduled from ECB's Centeno and de Cos. Earnings season resumes, with Johnson & Johnson, 3M, Microsoft and Verizon. 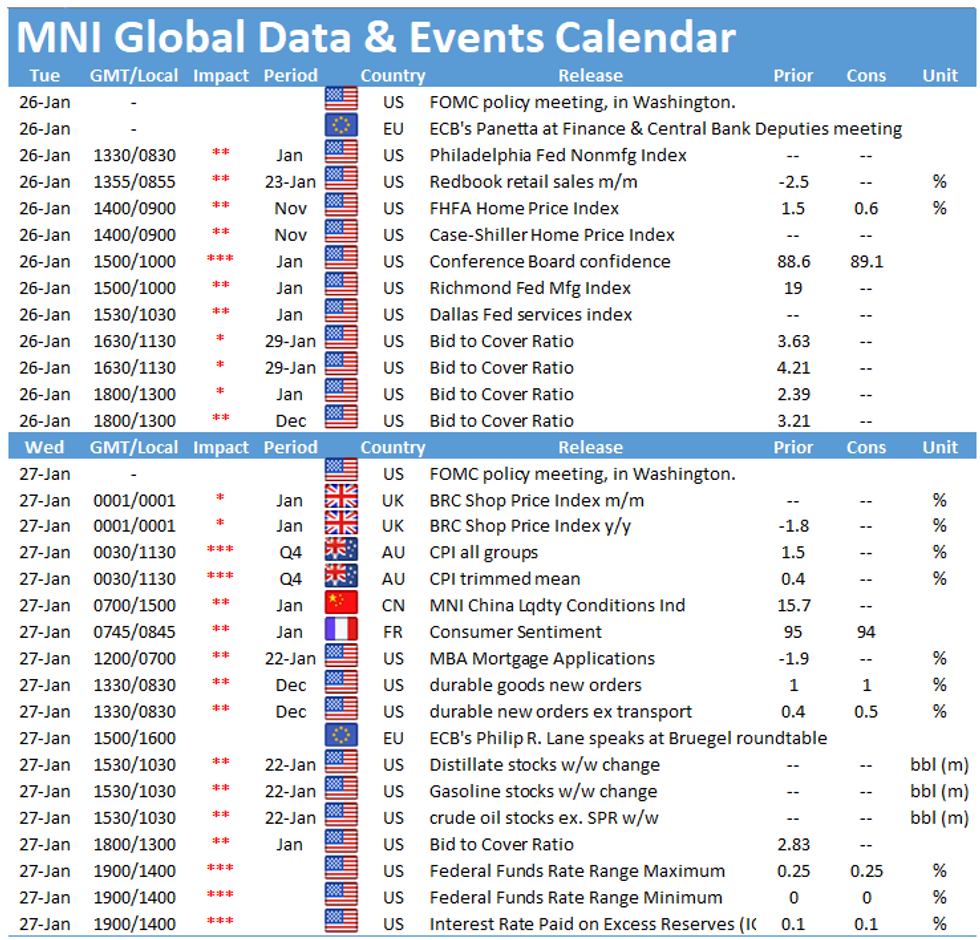 MNI London Bureau | +44 203-865-3807 | tim.cooper@marketnews.com
We are facing technical issues, please contact our team.
ok
Your request was sent sucessfully! Our team will contact you soon.
ok