Firmer Overnight On Evergrande Impulse, RBA Mins May Not Provide Much

J.P.Morgan: 20-Year Supply Should Be Digested With Relative Ease 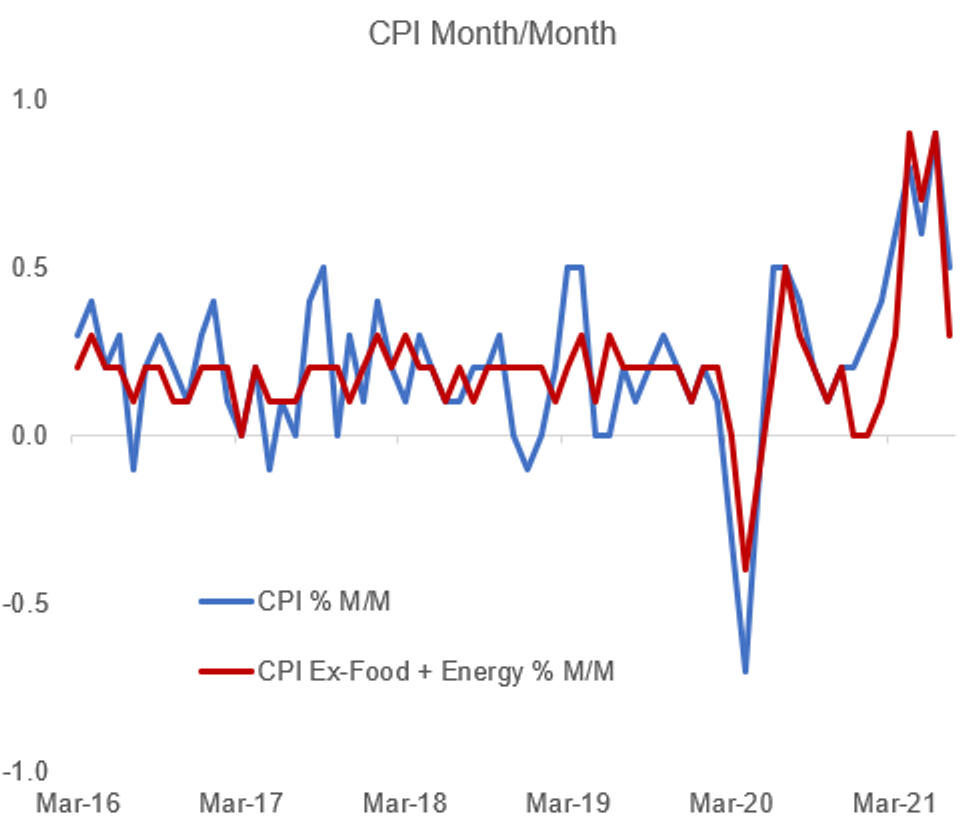 OIL (BBG): The world will have to wait until October for additional oil supplies as output losses from Hurricane Ida wipe out increases from OPEC+, the International Energy Agency said. Consumers should have been enjoying "solid gains" in production as the Organization of Petroleum Exporting Countries and its allies continued their revival of idle capacity, the agency said in its monthly report. Instead, global supply fell by 540,000 barrels a day in August due to unexpected disruptions and will be flat this month."Unplanned production outages have temporarily halted an uptrend in world oil supply that began in March, but growth is set to resume in October," said the Paris-based IEA, which advises developed economies on energy policy.

ECB (BBG): Bank of France Governor Francois Villeroy de Galhau say the European Central Bank is "vigilant" regarding stronger inflation but still expects it to be temporary. "It's true that it's gone up and there is a kind of spike in temperature due to supply difficulties and oil and input prices like semiconductors. We think it is a temporary spike and inflation will come back below 2% as soon as next year," Villeroy says on France 2 television. "We are vigilant without being worried"

AMAZON / US LABOR MARKET (RTRS): Amazon.com Inc has increased its average starting wage in the United States to more than $18 an hour and plans to hire another 125,000 warehouse and transportation workers, an executive told Reuters. The world's largest online retailer has raised pay from around $17 since May. In some locations, the company is giving signing bonuses of $3,000, said Dave Bozeman, vice president of Amazon Delivery Services, or triple what the company offered four months ago. The fatter paycheck shows how big employers are desperate to draw workers in an increasingly tight U.S. labor market. Fewer Americans are seeking jobless claims just as openings have hit a record in the reopening economy.

UK / COVID (BBG): Boris Johnson will confirm Tuesday that booster vaccinations against coronavirus will be rolled out to the most vulnerable people this fall, as he sets out the U.K.'s new approach to tackling the virus. The British prime minister will hold a press conference outlining who will be eligible for the booster shot, soon after Health Secretary Sajid Javid gives a statement on the issue to the House of Commons.

SOFR (BBG/FT): Bank of America has started marketing the first leveraged loan tied to the Secured Overnight Financing Rate, the main U.S. Libor replacement, the Financial Times reported. ,The bank has helped prepare a $3.25 billion financing package that includes a $750 million syndicated loan based on SOFR to fund the takeover of chicken producer Sanderson Farms, the FT said, citing people familiar with the matter.

Payroll employment rose by a record-high 241,000 in August, taking the number of people with salaried jobs 1,000 above the level seen in February 2020, the Office for National Statistics said Tuesday. The series, which dates back to July 2014, measures PAYE data and leads official employment statistics by a month . Job vacancies also rose to a fresh record high, up 269,000 in the three months to August, taking the number of job openings to 1.034 million.According to LFS data, which captures a wider range of workers, employment rose by 183,000 in the three months to July, the biggest gain since the three months to 2020. That pushed the unemployment rate down to 4.6% from 4.7% in the second quarter, in line with expectations. The jobless rate for August fell to 4.4%, according to experimental statistics, the lowest since June 2020. The overall employment rate rose to 75.1% in the three months to July, while the inactivity rate remained stuck at 21.2%, still well below the 20.2% held before the pandemic. 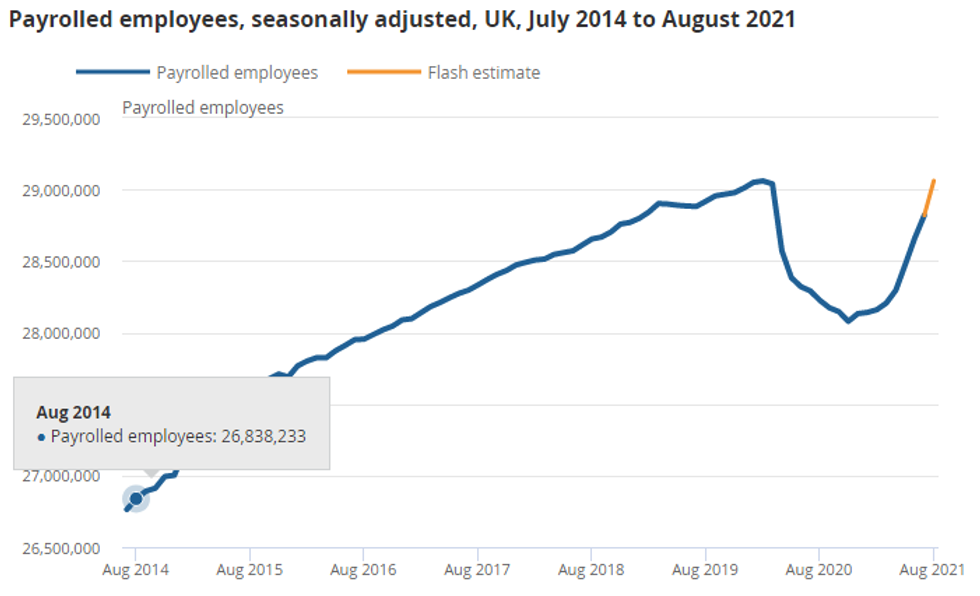 Core fixed income has been under pressure this morning, particularly in Europe which sees some heavy supply this morning. 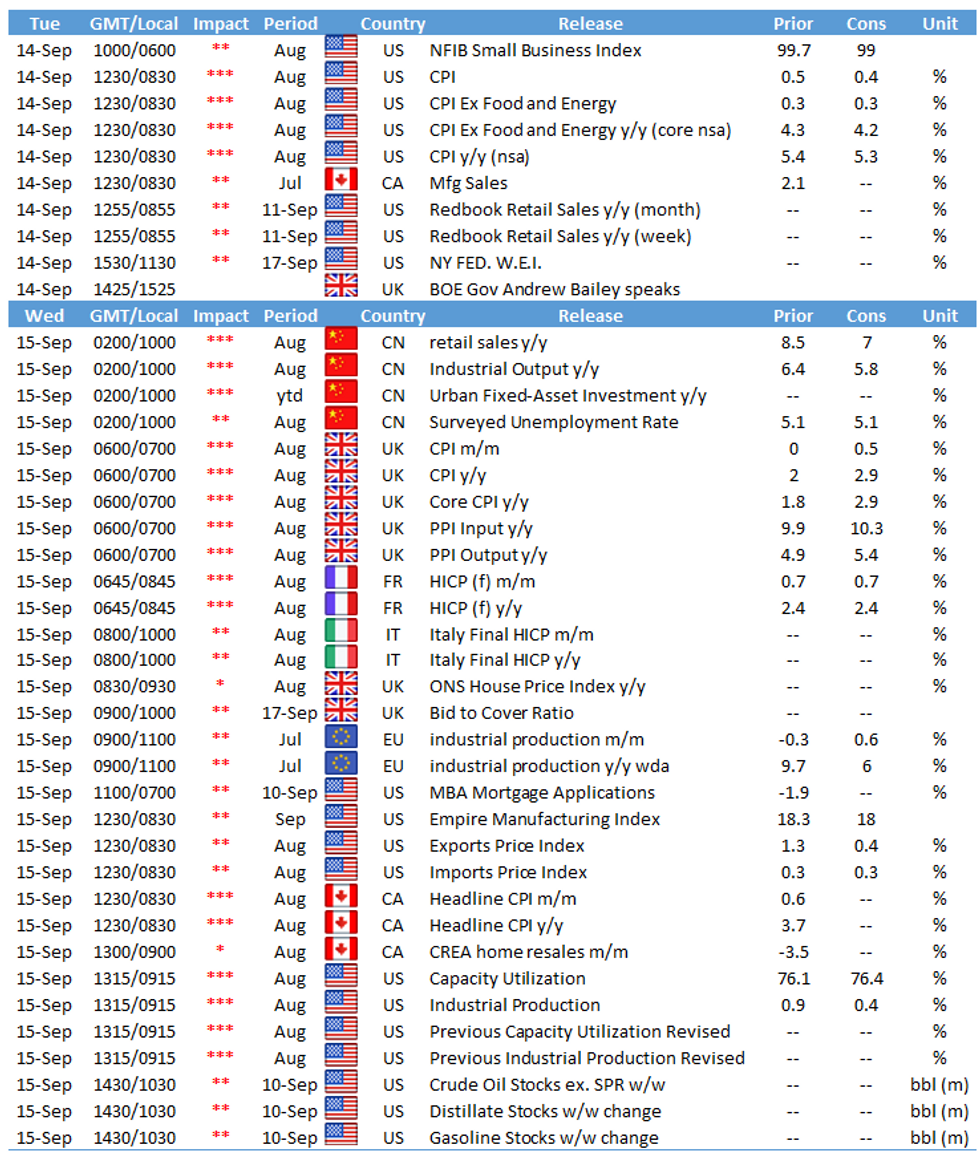