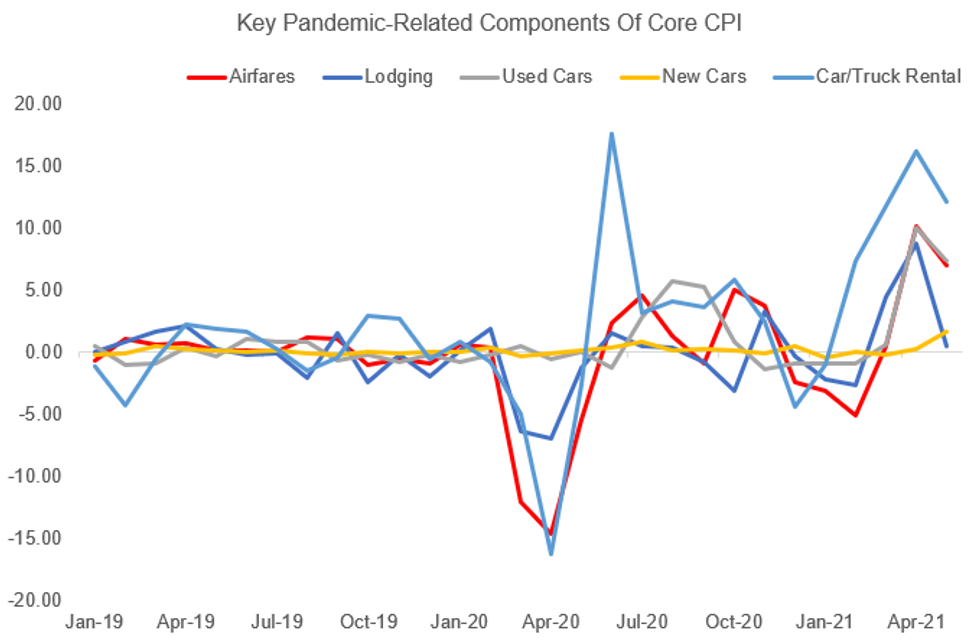 U.S. DATA: U.S. CPI in May increased 0.6% following a larger 0.8% gain in April, the Bureau of Labor Statistics said Thursday. From a year earlier, CPI was up 5%, beating expectations for an increase to 4.7% and the highest y/y percent increase since August 2008. Prices of used cars and trucks rose sharply in May, increasing 7.3% over April and accounting for roughly one-third of the m/m increase, the BLS said. The food index was up 0.4%, the same as April, and the energy index was unchanged, with a decline in gas prices offsetting increases in electricity and natural gas prices. From a year earlier, food prices were up 2.2% and energy costs rose 28.5%. Excluding food and energy, CPI was up 0.7% m/m and 3.8% y/y, the largest y/y increase since 1992.

ECB: The European Central Bank will continue buying bonds flexibly and in accordance with market conditions but still at a "significantly higher" pace than seen at the beginning of the year, ECB president Christine Lagarde said Thursday. Lagarde said there was "unanimous support for the introductory statement and broad agreement over what was proposed", although she acknowledged some debate on the pace of purchases and some of the analytical aspects of the use of instruments. "That's why I used the phrase 'broad agreement.' [...] There was some divergence about some particular aspects," she said. No other wording was proposed, Lagarde added. The central bank left other policy settings unchanged, with the deposit rate remaining at -0.5%, new asset purchases under the ECB's APP scheme at EUR20 billion a month. The overall envelope for the pandemic emergency purchase programme remained at EUR1.85 trillion, although the president acknowledged there was scope to buy less, or to adjust PEPP to buy more, as need dictated.

ECB: Euro area inflation will likely rise through the rest of 2021 as higher fuel costs and unwinds of 2020 temporary tax cuts work their way out of the consumer price index, European Central Bank President Christine Lagarde Citing the inflation projections of the ECB staff economists, Lagarde said inflation was expected to average 1.9% over 2021, 1.5% in 2022 and just 1.4% in 2023. Growth is projected at 4.6% in 2021, 4.7% in 2022 and 2.1% in 2023. That would see all output lost through the pandemic by H1 2022.U.S.: U.S. Treasury Secretary Janet Yellen Thursday said she is confident that America has avoided a K-shaped recovery, but warned many low-income nations appear on track for that outcome unless rich countries support them. "When I took office, one of my greatest concerns was a K-shaped recovery from the pandemic; a recovery where high-income households rebounded quickly – or even emerged better-off – while low- and middle-income families suffered for a very long time," she said about the American economy. "We can be confident now that's not going to happen."

U.S. MONEY MARKETS: Overnight reverse repo usage rose $32.0B to a fresh high of $534.9B today, with 54 counterparties involved. That's the 4th consecutive day of all time highs. Continued high takeup will almost certainly be a question for Fed Chair Powell at next Wednesday's FOMC press conference, though the downward pressure on market rates may not yet be enough to force the Fed to adjust administered rates.

U.S. FISCAL: Wires and social media reporting comments from Republican Senator Susan Collins (R-ME) saying that Senate minority leader Mitch McConnell has told fellow GOP senators that he is 'open' to a bipartisan infrastructure plan. Following the breakdown in talks between the White House and Sen. Shelley Moore-Capito (R-WV), former GOP presidential candidate, Sen. Mitt Romney(R-UT), is now leading a new effort to reach a bipartisan consensus. However, Romney's insistence of no new taxes to pay for the plans could prove a major obstacle. Should Collins' comments prove accurate and McConnell is willing to reach a deal with the White House it could prove a major boost to getting a deal through that isn't reliant on a reconciliation process.* Nevertheless, the prospect of a true bipartisan deal with support from Senate GOP leadership remains slim given the bitter relations between the two sides at present.

BOC: Bank of Canada Deputy Governor Tim Lane said Thursday that while inflation over the next several months will be faster than expected and may breach the top of the central bank's target band of 3%, the pressure is transitory. Slack in the economy will slow things down later this year, Lane said in the text of a speech, though over the next few months CPI gains will exceed the BOC's April projection, which called for a 2.9% average in the second quarter. The remarks came hours after the U.S. reported 5% CPI inflation for May, and Fed officials have also called such pressures temporary.

FRANCE (MNI INTERVIEW): A rebound in consumer spending means France's economy may not need an additional stimulus package proposed for later this year, but the government will be on the lookout for labour market bottlenecks, the French Treasury's chief economist told MNI. For full article contact sales@marketnews.com

Tsys initially sank on above-expected May inflation, but decisively reversed course shortly thereafter to session highs with participants looking through the 29-year high in core Y/Y CPI. The curve bull flattened and futures volumes eclipsed 2M for the first time since the Jun-Sep roll.

Strong price pressures were evident in the May CPI report.

US CPI: Shelter Prices Picking Up After A Lull

A few other notes on services prices in May: 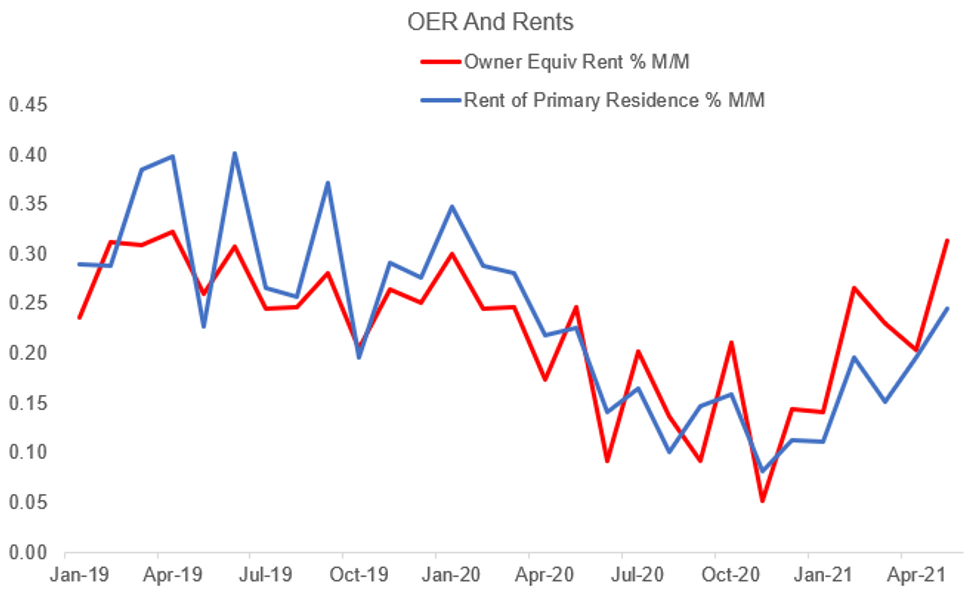 U.S. weekly jobless claims fell by 9,000 in the latest week to 376,000, indicating recent brisk progress in the labor market may be slowing. A Richmond Fed economist told MNI this month additional job gains may be harder to come by due to employment mismatches and lingering issues from the pandemic.

STIR: Overall Fed Funds And 75th Percentile Hanging In There

Of note is that the 75th percentile of transactions was again at 0.07% for the 2nd consecutive day Wednesday, after dipping to 0.06% Monday (leading to speculation the overall effective rate could dip below 0.06%).

Periphery EGBs outperformed Thursday as the ECB maintained steady policy. Bunds and Gilts were hit in sympathy with US Tsys after a stronger-than-expected US inflation print, but yields ended well off session highs (Gilts underperformed).