A generally muted overnight session for core global FI markets left T-Notes in a narrow 0-02+ range, last -0-01+ at 132-20, with benchmark yields little changed across the curve, in what was a typical pre-NFP session for the Asia-Pac region. T-Notes operate on light volume of ~46K at typing. The major cash benchmarks generally trade little changed to a touch richer on the day. The aforementioned NFP release headlines the local docket on Friday, with Fedspeak from Barkin also due. It is interesting to note that benchmark Tsy yields have been biased lower this week, even with expectations for a ~+1mn print in the headline NFP reading.

Commodity FX faltered in quiet Asia-Pac trade even as BBG Commodity Index extended gains to fresh multi-year highs, with little in the way of notable headline flow crossing the wires. JPY struggled for momentum despite aversion to high-betas, as Japanese gov't confirmed they will seek the extension & expansion of Covid-19 state of emergency.

The greenback continued its move lower, robust appetite for risk supported a bid in most Asia EM FX.

EQUITIES: In The Green

A positive day for Asia-Pac equity indices, supported by a positive lead from the US and further gains across the commodity complex. All major bourses are in the green at the time of writing, Taiwan leads the way higher ahead of what is expected to be positive trade data today, while markets in South Korea also saw strong gains after an upbeat economic assessment from the Vice FinMin. China added to gains after trade data showed a wider than expected trade surplus with soaring exports and import growth broadly in line with expectations. In the US futures are higher, markets await the April payrolls report which will be dissected for clues as to the Fed's timetable for tapering.

The DXY saw a small extension through yesterday's lows in Asia, which, when coupled with a steady U.S. yield environment, allowed bulls to add a handful of dollars to yesterday's gains. Spot last deals at ~$1,820/oz after yesterday's convincing break through $1,800/oz. Bulls now target the Feb 12 high at $1,830.8/oz, with today's U.S. NFP print providing the headline risk event ahead of the weekend.

Crude futures are higher in Asia, WTI & Brent print a little over $0.40 better off. The move higher today has been supported by a slight pullback in the greenback and improved risk appetite. For the week the benchmarks are up over 2%, the second straight weekly gain. 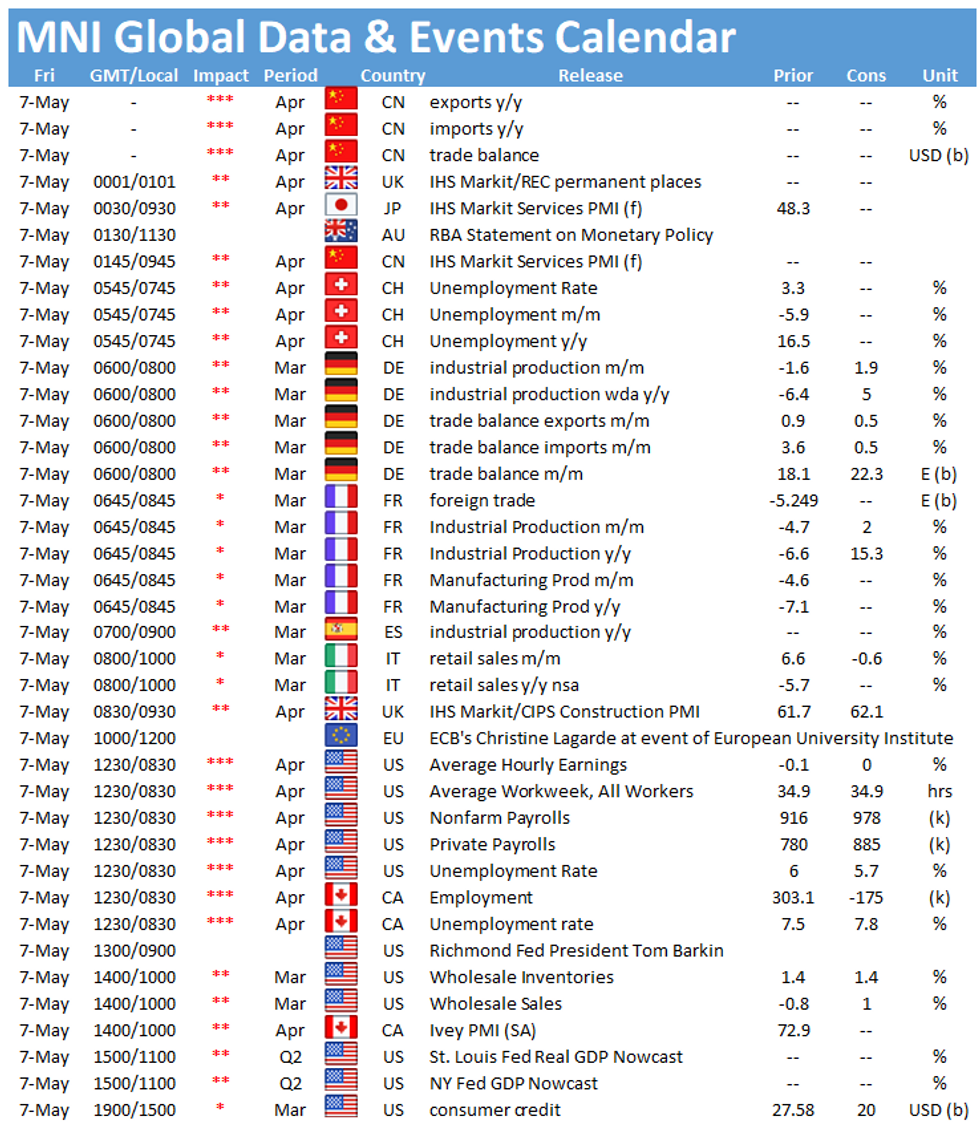