A full data calendar expected Thursday, with UK public finances -- the last series before next Tuesday's Budget -- the early highlight.

UK Sept Borrowing Set To Widen Ahead of Budget (0700BST)

UK public sector borrowing is set to widen in September, according to City analysts, but downward revisions to back data have left government finances in better shape than anticipated during the depths of the recession. Borrowing rose to GBP22.6 billion from GBP20.014 billion in August, a figure revised downward by GBP500 million from the original release in September. If forecasts are confirmed, borrowing would remain significantly below the GBP25.673 billion recorded a year earlier.

The data are the last official assessment of public finances ahead of Chancellor of the Exchequer Rishi Sunak's budget on 27 October. While the pandemic has ravaged the government's financial position, borrowing estimates remain well below OBR predictions when the recession began. Borrowing numbers have been revised downward in every month since April of 2020, with revisions averaging GBP3.8 billion over the course of this year.

Borrowing will be inflation by a GBP800 million divorce instalment payment to the European Union, following similar-sized outflows in July and August. A new EU invoice for the fourth quarter was due for issue in September.

The CBRT are broadly expected to reduce its one-week repo rate by 50-100bps this week with visible signs of frustration from Erdogan bolstering the political influence component of the bank's 'revisionist' stance on policy, our emerging markets desk write. This comes against a backdrop of rising inflationary pressures on a global scale as the CBRT loosens its policy setting into oncoming CPI tailwinds.

Both headline and core CPI rose in September, printing y/y at 19.58% & 16.98% respectively (vs 19.25% & 16.62% prior), while PPI dipped slightly to 43.96% vs 45.52% prior. Food prices and supply-induced factors were highlighted as the key drivers of the higher print but were labelled as transitory in numerous statements by CBRT governor Kavcioglu. Here, we see pricing data being a less dominant driver in the decision-making process under the bank's new 'revisionist' framework, with rising core metrics doing little to deter policymakers from easing directly into more pronounced domestic and global inflationary headwinds. 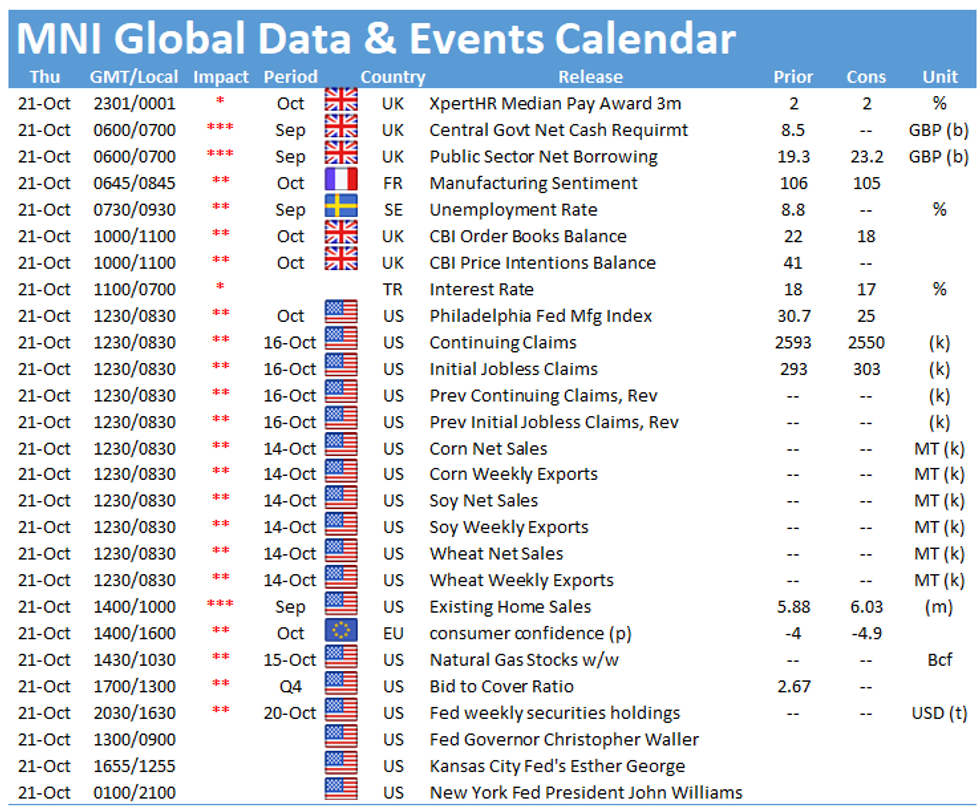