GoCs Steady Ahead Of Upcoming Data

Canada has already deployed enough deficit spending for the economy to rebound as vaccines roll out later this year, potentially making the plan for another CAD100 billion of stimulus unnecessary, government adviser and Conference Board of Canada chief economist Pedro Antunes told MNI.

Gross domestic product should return to pre-pandemic levels around the end of this year, led by consumers flush with cash from past government relief payouts, he said in a phone interview. Assuming vaccines are widely delivered in the third quarter, as the government projects, jobs should also recover and help compensate weakness in exports and business investment, according to a new forecast he published Tuesday. 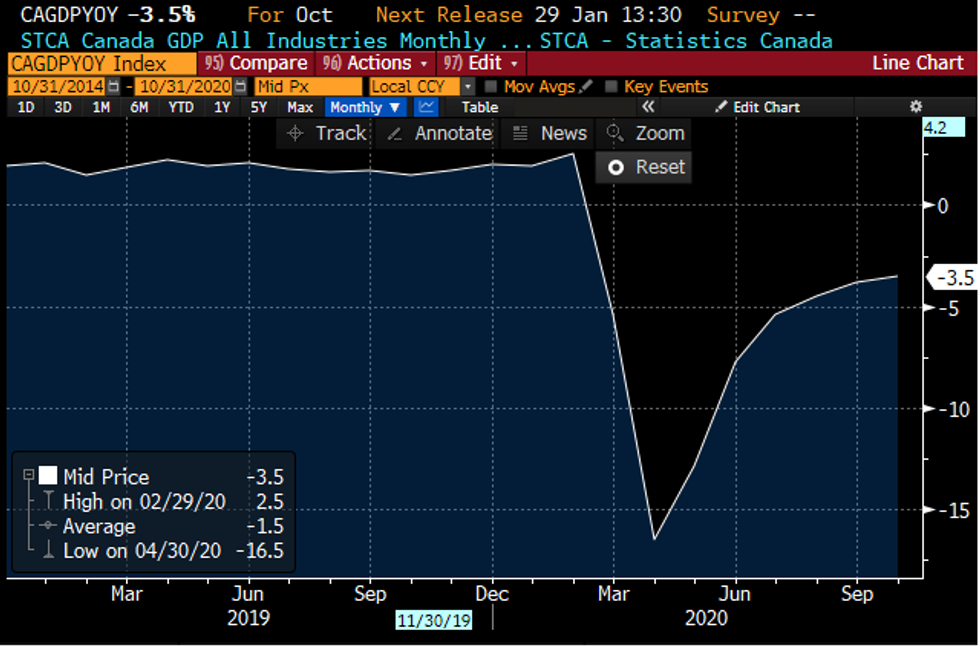 "In the second half of this year, we do feel that households will turn the taps back on in terms of their spending and generate some growth," said Antunes, whose group has contributed to forecasts used to shape federal economic projections and testified to parliament on the economy. "Balance sheets are really in good shape for consumers to keep spending and help the economy recover as their confidence comes back."

GDP should gain 5.3% this year and 3.5% in 2022 even without any of the CAD70 billion to CAD100 billion of extra deficit spending the government has pledged over the next three years, according to Antunes' forecast. Consumer finances will remain in "great shape" with savings averaging CAD113 billion this year even as families return to normal spending, five times what they had before the pandemic.

Finance Minister Chrystia Freeland in November laid out a record CAD382 billion deficit for the fiscal year ending in March, or 17.5% of GDP, and another CAD121 billion in fiscal 2021-22, excluding the CAD100 billion plan.

"By the time we get two or three years out, we're looking at a debt to GDP ratio that is anywhere from 95% to 100% of GDP, collectively, provinces and federal government," Antunes said. "So we'll just want to be a little more careful about whether we need the stimulus," Antunes said.

Parliament's independent budget officer also said in December the extra CAD100 billion may come too late after the job market has recovered. Freeland pledges to restore a fiscal "anchor" such as the ratio of debt-to-GDP later, aiming now to take advantage of rock-bottom interest rates to avoid the biggest danger of prolonged economic weakness.

"The issue is we've got nothing left to fight another crisis here," Antunes said. "The target going forward should be to lower the debt-to-GDP ratio in coming years."

While big parts of the economy should recover by year-end, there will still be a gap between actual and potential output, Antunes said. That's the kind of slack the Bank of Canada has identified when promising not to raise its 0.25% interest rate until 2023 so inflation returns to its 2% target.

The BOC will likely stick to that plan on rates, Antunes predicts, and any inflation pressure will likely first influence the QE program worth at least CAD4 billion a week.

Bond investors driving up yields, or consumer prices pushed up by the extra money supply and deficit spending could lead to the central bank's adjusting QE, he said. Governor Tiff Macklem has said he will keep going with asset purchases until the economic recovery is well underway, and has already slowed the pace from CAD5 billion.

"Can this really keep this up without seeing some additional pressures on inflation?" said Antunes, who who used to work in the central bank's domestic forecasting branch. "It may have to face that in the future."