China's rising factory gate inflation is unlikely to lead directly to higher consumer prices and while both are expected to end the year above current levels, neither should be taken as a key indicator for bond yield moves in the short term, advisors and analysts told MNI.

Producer prices rose to an over two-year high of 1.7% in February, driven by higher crude prices and industrial commodity prices. The consumer price index remained in negative territory for the third month in four, at -0.2%, just above November's 11-year low.

According to Ming Ming, deputy director of CITIC Securities and a former staffer at the People's Bank of China, higher factory gate prices are largely the result of robust overseas demand, as domestic industrial demand is slowing and consumption remains sluggish. There is limited scope to pass on producer price inflation to the broader consumer market without stronger demand, he added.

The solid recovery in the manufacturing sector has pushed PPI higher, said Zong Liang, chief researcher of Bank of China, but fierce competition in attracting consumer demand is hampering the ability to pass on increased costs. One upside of higher PPI, according to Zong, is that robust overseas orders received by upstream producers could help future corporate investment.

CPI is seen picking up from current depressed levels through 2021, averaging around 2% but ending the year at 2.5%, closer to Beijing's 3% target. PPI is likely to peak at around 5% mid-year, before slowing into year end and averaging around 3%-4% for the 12 months, the advisors forecast.

The apparent divergence between producer and consumer prices continues is a trend that has been in place for almost a decade. Supply side reforms and the boom in property and infrastructure spending have pushed producer prices higher, while decreased labour supply and sluggish income growth have helped depress prices of consumer goods and services, Ming said. CPI has been driven largely by volatile food prices, particularly pork prices, in the wake of 2018's African Swine Fever, he added. 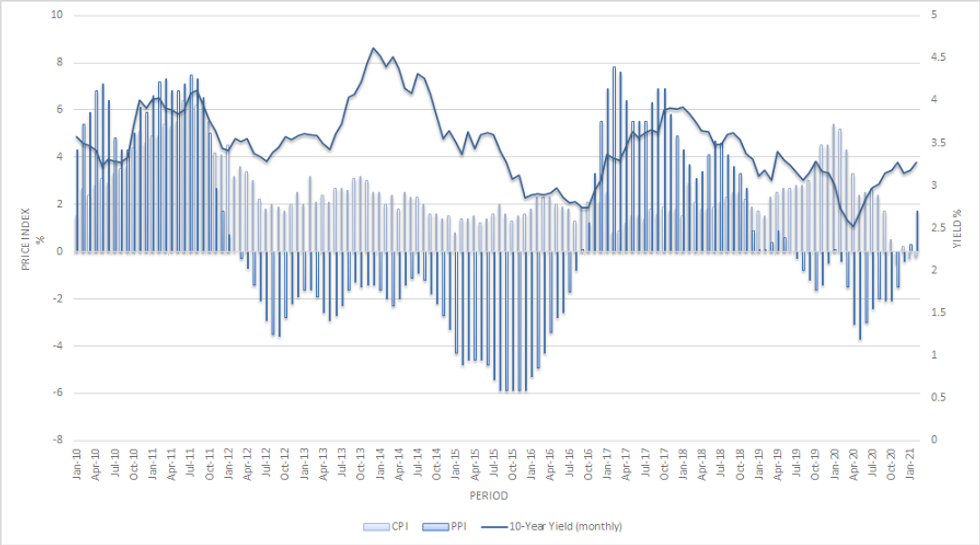 Chen Daofu, deputy director at the Financial Research Institute of the Development Research Center of the State Council, noted that much of China's inflation has been in assets, particularly house prices that aren't included in official data. If there is an inflation expectation in China, it lies in asset prices, Chen added.

Alongside the breakdown in CPI and PPI correlation, consumer prices have also broken any link with 10-year bond yields. The charts show a much closer tie to PPI in recent years, but advisors say neither indicator is a major driver for bond markets at present.

Ming accepted that rising producer prices were a warning sign but unlikely to trigger a shift in central bank policy.

Both Ming and Chen say it is no great surprise that PPI has had a closer tie to bond yields in recent years as infrastructure and property investment, heavy users of commodities and industrial products, have been the main driver of the economy. That logic has now changed, Ming added. He forecast that PPI would sever any link with the 10-year CGB yield soon, as at the current stage, the indicator hardly represents "improving economic fundamentals."

Chen also dismissed the idea of a causal link between China's bond market and inflation indicators, saying the domestic market was less developed than many western bond markets and was still largely a vehicle for buy-to-hold investors rather than interest arbitrage traders.