ECB (RTRS): The European Central Bank must keep its money taps fully open, as the euro zone economy is still in the throes of the coronavirus pandemic despite progress in vaccination campaigns, ECB policymaker Yannis Stournaras said. ECB rate-setters will review the pace of emergency bond purchases at their June 10 meeting against an improved economic backdrop. Growth and inoculation rates are rising in the bloc as COVID-19 cases fall. However, in an exclusive with Reuters, Stournaras said the recovery remained fragile and, with no evidence to point to an era of high inflation in the foreseeable future, it was too early for the ECB to slow down emergency bond purchases.

GERMANY: German business confidence was higher again in May, rising to the highest level since May 2019, the Munich-based Ifo Institute said Tuesday. The headline index rose 2.6 points to 99.2 in May, as the corporate assessment of the current situation (95.7) improved, leaving firms more optimistic over the outlook (102.9). "The German economy is picking up speed", the Ifo Institute said. Manufacturing sentiment rose marginally with firms being more satisfied with their current situation, while their expectations dropped markedly, although "material shortages became an even more pressing concern." the survey noted. Service sentiment jumped to the highest level since the start of the pandemic as firms are more optimistic. Expectations also increased in hospitality and tourism, with "retailers hoping the economy will open up further," the Ifo added.

E.U.: Following the focus of the first day of the special European Council summit resting on Belarus' forced landing of a Ryanair flight to arrest an opposition journalist, today EU leaders have just begun to discuss the bloc's response to COVID-19 and climate change policy. The Council last night made the decision to recommend additional sanctions to be placed on individuals and entities linked to the Lukashenko regime as well as flights from the Belarusian flag carrier airline being banned from flying in EU airspace or landing at EU airports. Both of these decisions will require approval by the relevant Council of Ministers in order to be implemented (conclusions here). EU Council conclusions on Russia, EU-UK, MENA, and SSA. Given that the primary focus of the evening's discussion focused on Belarus, many of these conclusions did not get significant debate or focus in the Council meeting.

E.U.: European Commission President Ursula von der Leyen tweets on COVID-19 vaccinations: "We made steady progress on vaccination in EU: 300 million doses delivered, 245 million vaccinations, 46% of the EU adult population has received at least one dose. This week we'll reach a new milestone: half of EU adults will have received their 1st dose."

U.S./MIDDLE EAST (AP): U.S. Secretary of State Antony Blinken has arrived in Israel at the start of a Middle East tour aimed at shoring up the Gaza cease-fire.He will face the same obstacles that have stifled a wider peace process for more than a decade, including a hawkish Israeli leadership, Palestinian divisions and deeply rooted tensions surrounding Jerusalem and its holy sites.The 11-day Gaza war killed more than 250 people, mostly Palestinians, and caused widespread destruction in the impoverished coastal territory. Blinken is expected to focus on coordinating reconstruction without engaging with Gaza's militant Hamas rulers, who are considered terrorists by Israel and Western countries.The truce that came into effect Friday has so far held, but it did not address any of the underlying issues.

RBNZ PREVIEW (MNI): We expect the RBNZ to leave all of the main monetary policy parameters unchanged on Wednesday, which should be coupled with upgrades to economic forecasts vis-à-vis February MPS. For full preview contact sales@marketnews.com

BANKS (BBG): Deutsche Bank AG is moving about a quarter of its corporate bank's U.K. staff to offices in the European Union and Asia as it looks to reduce costs at the division. The changes will see about 100 jobs move to cities like Berlin, Dublin, Frankfurt and various cities across Asia, according to people familiar with the matter, who asked not to be identified discussing private matters. While some London-based staff can reapply for their jobs in the new locations, they will be required to take a pay cut. 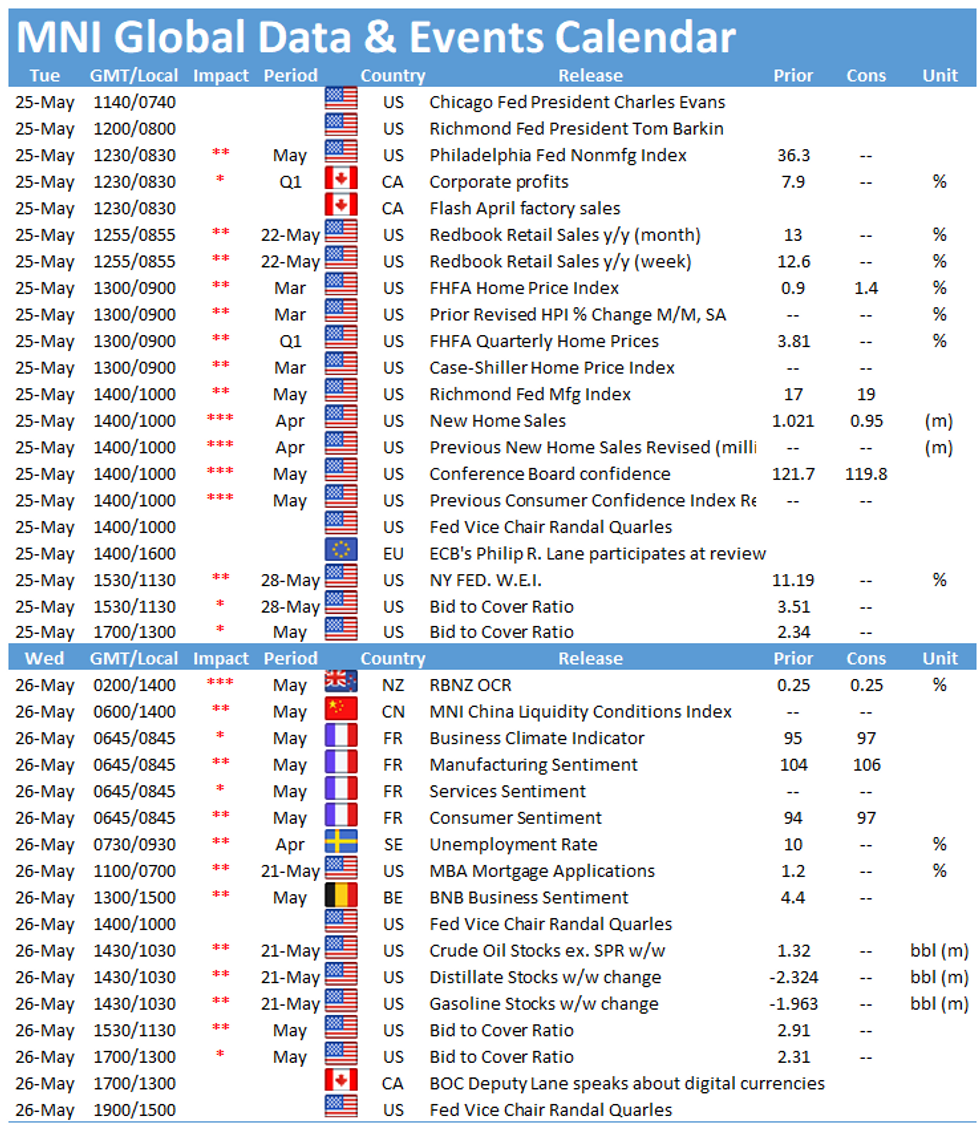