Nominee For Chinese Ambassador: China Must Stop Bullying Of Taiwan 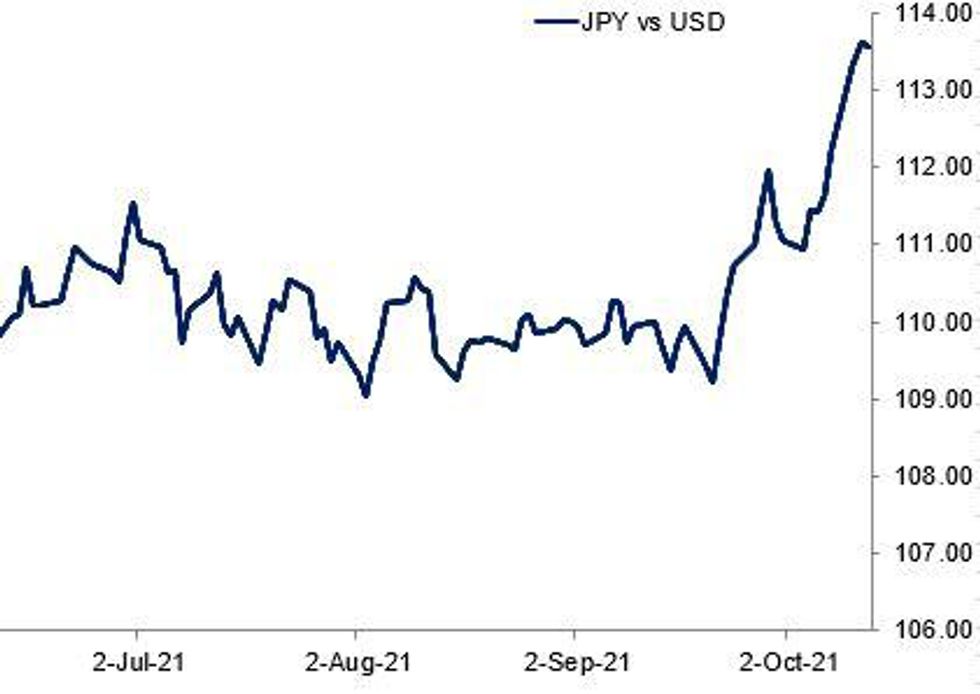 E.U./UK. (BBG): The European Union will offer a new package of concessions to the U.K. that would ease trade barriers in Northern Ireland, as the two sides prepare for a new round of contentious Brexit negotiations.Later Wednesday, Maros Sefcovic, the EU's chief Brexit negotiator, will offer to cut as much as 50% of the customs checks in Northern Ireland and up to 80% of the sanitary checks on food imports, according to officials familiar with the proposal. Procedures for medicines would remain largely unchanged, with U.K. packaging and labeling.

E.U.: Later today at 1200CET (0600ET, 1100BST), Energy Commissioner Kadri Simson is set to outline the European Commission's so-called 'energy toolbox' to assist member states (MS) dealing with soaring energy prices amid a crunch in gas supplies. There has been significant focus on what the Commission could do to ease pressure on MS' and consumers, but expectations are that at this stage the Commission is more likely to remind MS' of their already-available options rather than launch a major new relief scheme. Politico reports that in the short term MS' will be reminded of the ability to subsidise failing energy companies and cut taxes in order to prop firms up without breaching EU state aid rules while vouchers created using the Emissions Trading System can be used to assist low-income households struggling with energy bills.

RUSSIA / ENERGY (BBG): Russia is still injecting natural gas into its storage facilities and will complete the process by Nov. 1 as planned, said the country's deputy energy minister.There's now enough of the fuel in domestic inventories to get the country through the winter, however cold it may be, Evgeny Grabchak told reporters at Russian Energy Week in Moscow on Wednesday. "Do we expect a very cold weather? We don't," the deputy minister said. "Are we ready for it? We are."

HONG KONG / EQUITIES (BBG): Hong Kong suspended schools and the city's $6.3 trillion stock market canceled trading Wednesday as strong winds and rain from typhoon Kompasu lashed the financial hub.Hong Kong Exchanges and Clearing Ltd. canceled securities trading, including the Hong Kong-China stock connect and derivatives markets, for all of Wednesday after Kompasu halted after-hours trading the day before. The city raised the storm warning alert to No. 8, the third-highest on its scale, from No. 3 Tuesday afternoon.

UK GDP grew by 0.4% in August, slightly slower than expectations, but output in July contracted after a revision, dropping by 0.1% versus the previously-reported 0.1% rise. That lease output 0.8% below February 2020 levels -- helped by the earlier upward revision to Q2. The data will raise questions over whether the UK recovery came to an end in Q3, which September likely to be very soft, owing to petrol shortages and a sharp rise in natural gas prices that dampened some industrial activity.

Services expanded by a slower-than-expected 0.3% in August, lifted by a 1.2% rose in consumer-facing activities. All other services rose by just 0.1%. Manufacturing increased by 0.5%, lifting production by 0.8%, while construction declined by 0.2%. The downward revision in July stemmed from downwardly-revised data for motor vehicles oil and gas. Manufacturing declined by 0.6% in July, compared to the originally-reported outturn of no term.

The total UK trade deficit widened to GBP3.716 billion in August, the biggest gap since December 2019. The goods trade gap expanded less dramatically, to GBP11.211 billion from GBP11.147 billion in July, still the biggest shortfall since March 2021. Goods exports increased by 0.9% in August, while imports rose by 1.2%.

Exports to non-EU nations fell slightly to GBP12.998 billion, while EU shipments declined to GBP12.809, narrowing the gap between the two export destinations that opened up at the start of the year following the UK's withdraw from the transitional EU trading arrangement.

Eurozone industrial production fell sharply in August, declining by 1.6%, the biggest fall since April of 2020, more than erasing a 1.4% increase in July (revised downward from the originally-reported 1.5% increase). Energy output increased by 0.5% in August, the first rise since April, but all other categories suffered significant retreats. Production of capital goods fell by 3.9%, while durable consumer goods slumped by 3.4%.

FIXED INCOME: Moving on up ahead of US CPI

Core fixed income has drifted higher across the board this morning led by Bunds and gilts.