BOC: FAR TOO EARLY TO BE TALKING ABOUT RATE CUTS

Fifth and Sixth Venezuelan Crude Cargoes Set for US 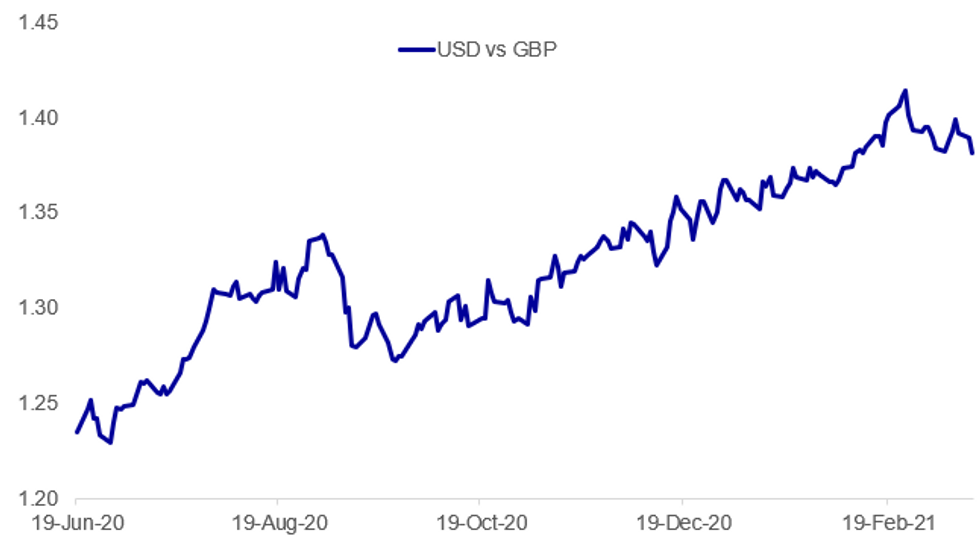 US DATA: US retail sales are set to slip in February as snow storms across the country kept many consumers at home. However, with parts of the country reopening, the vaccination programme picking up pace and the December stimulus checks landing, there was some support coming into the traditionally weak month for spending, industry experts explain in MNI latest Reality Check. Sales rebounded sharply in January, up 5.3% after falling by 1.0% in December. Excluding motor vehicles, retail sales surged by 5.9%. In February, analysts are looking for a renewed decline in sales, with the median expectation pointing to a m/m decline of 0.4%. The data is due at 0830ET/1230GMT Tuesday.

ECB: There is no need for the European Central Bank to target a specific yield level on benchmark 23-year yields, as markets already believe the central bank won't raise rates for that period 'so that part of the curve is secure," chief economist Philip Lane said in an interview published Tuesday. Addressing average inflation targeting, Lane accepts there are communication challenges ahead, but doesn't see a 'strict' version to be the outcome of the policy review, expected to be published in coming months.

MNI FED PREVIEW: Though the FOMC is unlikely to announce any major changes in policy at the March meeting, the latest set of economic projections - including participants' rate hike expectations - will be closely watched. A "dot plot" showing a 2023 median Fed funds rate hike is likely to be seen as a hawkish development. The Fed is likely to extend temporary SLR exemptions before they expire at end-March, but this decision may not be revealed at the FOMC meeting. Some analysts expect the Fed to hike IOER Wednesday, but more likely this will wait until April or later. See following link for full PDF (or contact sales@marketnews.com if you can't access): https://roar-assets-auto.rbl.ms/documents/9169/Fed...

COVID VACCINE (RTRS): French Health Minister Olivier Veran said on Tuesday that he expected a verdict from the European scientific community on AstraZeneca's COVID-19 vaccine on Thursday that would allow the inoculation campaign to resume as soon as possible. Veran also told reporters that the risk-reward ratio for the vaccine remained positive. "We expect some kind of verdict from the European scientific community by Thursday afternoon, allowing us to resume the campaign," Veran said.

COVID VACCINE (RTRS): The decision by Germany, France and Italy to suspend AstraZeneca's COVID-19 shots after several countries reported possible serious side-effects is a "political one", the director general of Italy's medicines authority AIFA said on Tuesday. "We got to the point of a suspension because several European countries, including Germany and France, preferred to interrupt vaccinations... to put them on hold in order to carry out checks. The choice is a political one," Nicola Magrini told daily la Repubblica in an interview. Magrini said that the AstraZeneca vaccine was safe and that the benefit to risk ratio of the jab is "widely positive". There have been eight deaths and four cases of serious side-effects following vaccinations in Italy, he added.

COVID VACCINE (RTRS): AstraZeneca's chief executive is in the "hot seat" over delays to deliveries of its COVID-19 vaccine shot to European countries and must provide more details of his production plans, France's Industry Minister Agnes Pannier-Runacher said. AstraZeneca said last week it would try to deliver 30 million doses to the European Union by the end of March, down from a contractual obligation of 90 million and a previous pledge made last month to deliver 40 million doses. The new target is not guaranteed as it hinges on regulatory approval of a vaccine factory in the Netherlands. Asked if chief executive Pacal Soriot was under sufficient pressure from the EU, Pannier-Runacher told France Info radio: "I think he is in the hot seat and that he absolutely aware of it."

GERMANY / COVID (RTRS): Coronavirus infections are rising exponentially in Germany, an expert at the Robert Koch Institute for infectious diseases said on Tuesday, adding that the risk of AstraZeneca's vaccine was relatively low. The number of cases per 100,000 reported on Tuesday was 83.7, up from 68 a week ago, and the RKI has said that metric could reach 200 by the middle of next month. "We are exactly on the flank of the third wave(of the COVID-19 pandemic). That can no longer be disputed. And at this point we have eased the restrictions and that is speeding up the exponential growth," Dirk Brockmann, an epidemiologist at the RKI, told Germany's ARD television.

RIKSBANK (BBG): The Swedish economy has withstood the second wave of Covid infection relatively well, supported by extensive economic policy measures, says Riksbank Governor Stefan Ingves in a monetary-policy hearing in parliament's Riksdag Committee on Finance. The recovery that has begun is divided, with some service sectors still severely affected. There is considerable uncertainty, but unlike many other crises, GDP is expected to gradually return to the pre-crisis level.

RIKSBANK (BBG): It may be necessary to lower the repo rate "if problems arise regarding confidence in the inflation target," Riksbank Deputy Governor Per Jansson says in presentation slides to parliament's finance committee.

U.S.-CHINA (BBG): U.S. Secretary of State Antony Blinken said China is using coercion and aggression in places that include Hong Kong in comments that came after talks in Tokyo, which marked his debut visit abroad since taking office. Foreign Minister Toshimitsu Motegi, who held discussions with Blinken, said at a joint news conference the U.S. and Japan reconfirmed that their security treaty covers the Senkaku islands 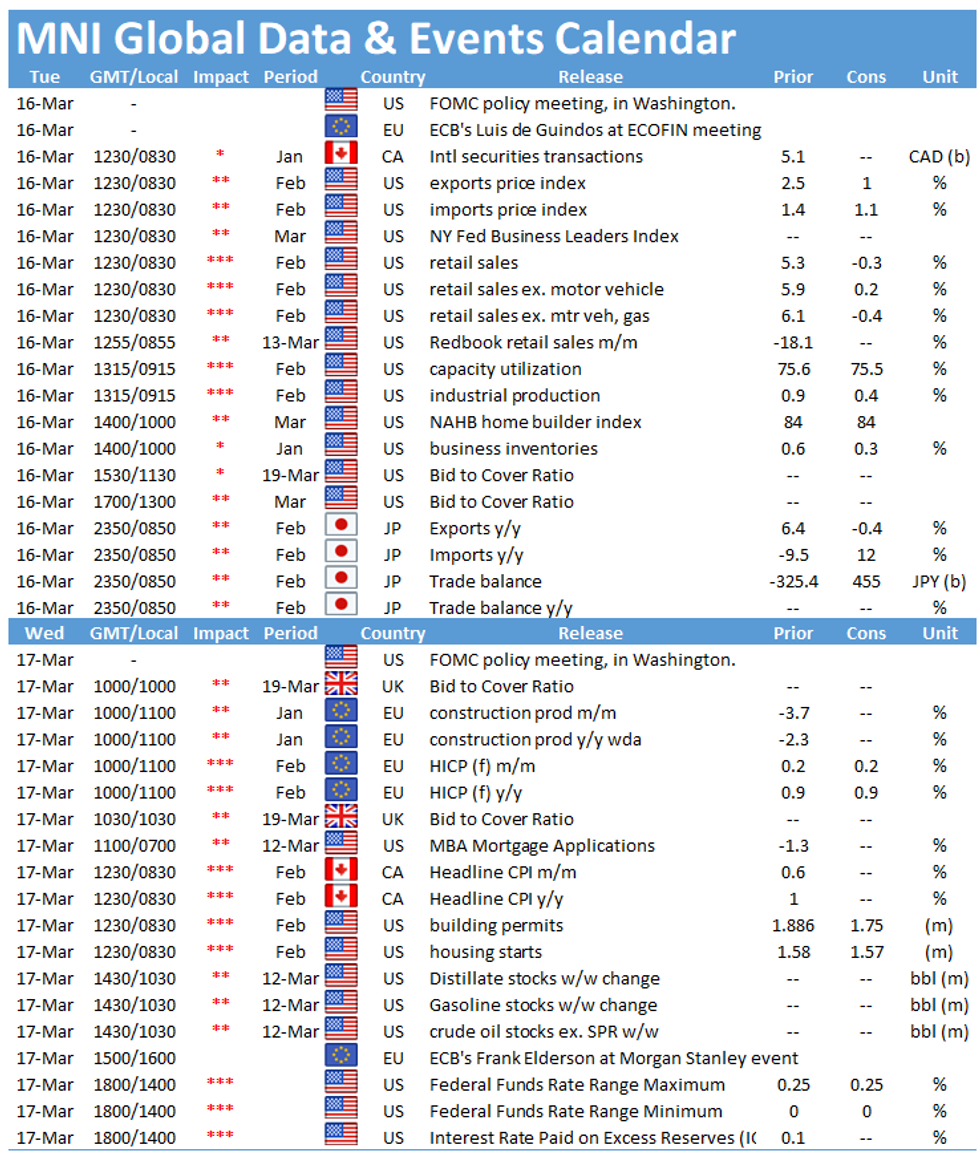