Weakness in JGB futures probably helped T-Notes off of early Asia highs after the latter had a look through its Friday highs early on, before a modest bid came back in, although the range for T-Notes was limited to 0-03. Contract last +0-03 at 136-30+, with volume running at a sedate ~50K owing to the U.S. holiday, which in turn means that cash Tsys will be closed until Tuesday's Asia-Pac session. Weekend headline flow surrounding COVID-19 vaccine matters was a little negative, with Sino-U.S. tensions and DC political matters at the fore elsewhere. The space looked through stronger than expected Chinese GDP data. Eurodollar futures sit unchanged to +0.5 through the reds, with activity in the space calming after some buying activity in early Asia-Pac hours. A 10K lift of EDU3 provided the highlight of that particular round of flow.

The latest CFTC CoT report saw an extension of net short exposure in TU, FV and US futures, while net exposure to TY futures moved into net short territory for the first time since early November, hitting the shortest levels seen since June in the process. 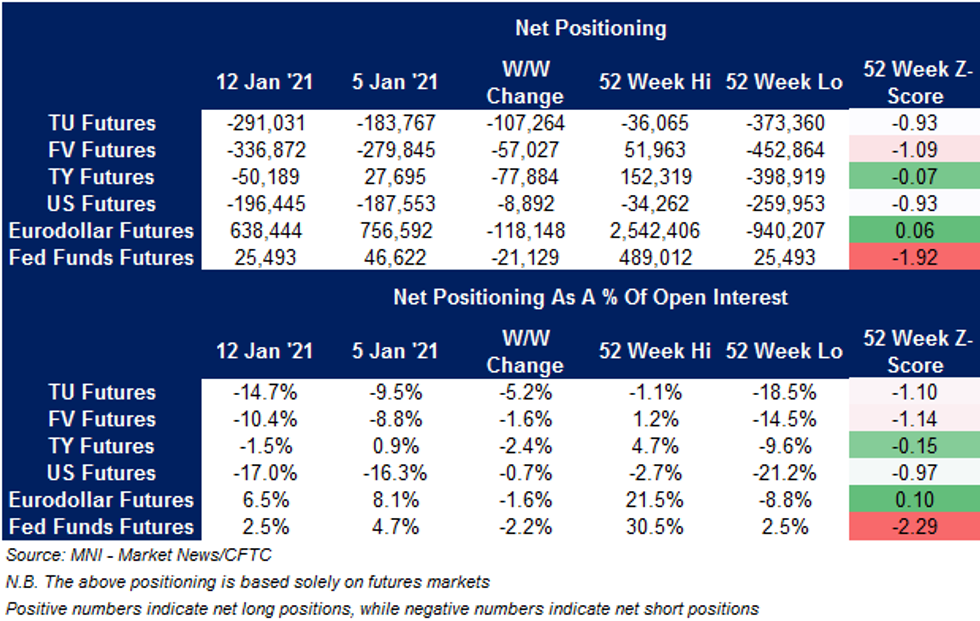 Participants shied away from riskier currencies in a slow start to the week caused by a market holiday in the U.S., with markets awaiting the this week's congressional testimony from Janet Yellen, the inauguration of Joe Biden as the new U.S. President and a number of central bank decisions. The WSJ circulated a piece noting that Yellen is expected "to affirm the U.S.'s commitment to market-determined exchange rates when she testifies on Capitol Hill Tuesday, and she will make clear the U.S. doesn't seek a weaker dollar for competitive advantage." The article lent support to the greenback, allowing it to outperform all of its G10 peers save for the yen, which gained on the back of broader sense of caution.

EM Asia currencies suffered amid risk off sentiment and some upside in the greenback. The US dollar caught a bid following WSJ reports suggesting that Yellen is expected "to affirm the U.S.'s commitment to market-determined exchange rates when she testifies on Capitol Hill Tuesday, and she will make clear the U.S. doesn't seek a weaker dollar for competitive advantage."

EQUITIES: Risk Off And Thin Volumes

Asian equity indices and European/US futures have declined to kick off the week in Asia, under some pressure as broad risk off sentiment prevails, volumes are thin with US markets away for Martin Luther King Jr. day.

Spot gold saw a sharp move lower in early Asia-Pac trade, with little in the way of headline flow behind the price action. This left most to point to thinner liquidity conditions around Monday's U.S. holiday as a major component of the move, exacerbating downward pressure on a technical break below the recent lows. This train of thought was given further credence by the subsequent recovery, with spot last dealing the best part of $10/oz higher, just shy of $1,840/oz, after printing as low as $1,804.7/oz early on. A move through today's early low would open the way to round number support at $1,800/oz, with any sustained breach there set to shift bearish focus to the Dec 1 low, located at $1,775.9/oz. To the upside, bulls need to reclaim the 50-EMA before looking higher.

Oil is lower to kick off the week, holding declines seen on Friday, with WTI & Brent $0.30-0.40 softer at typing. The declines come amid general risk off sentiment with most equity indices in the region negative and global futures also under some pressure.