MNI EUROPEAN MARKETS ANALYSIS: No Unwind For U.S. Tsys Ahead Of Event Risk

T-Notes stuck to a narrow 0-03+ range overnight, last dealing +0-01 at 132-25+. Cash Tsys trade unchanged to 1.5bp richer across the curve, with bull flattening in play as regional players reacted to Wednesday's bid and looked through any positives surrounding a phone call between the U.S. and Chinese ministers of commerce. Preliminary open interest data pointed to short covering in TU, TY, UXY & US futures on Wednesday, which was touted at the time. Finally, a 3,665 lot block buy of TYU1 futures helped the broader bid during Asia-Pac hours. Participants may be happy to sit on the sidelines ahead of risk events scheduled during Thursday's European & U.S. sessions (the ECB monetary policy decision, U.S. CPI print & 30-Year Tsy supply). Weekly jobless claims and real AHE data pad out the local economic docket.

The latest round of weekly international security flow data revealed that net flows were relatively subdued across all 4 major categories, with the highlight being net weekly foreign purchases of foreign bonds by Japanese investors, bringing an end to 2 straight weeks of net selling in that category.

China stole the limelight again, as offshore yuan gained on the back of reports that Commerce Mins from the U.S. and China have agreed to improve bilateral trade and investment ties. Separately, PBOC Gov Yi told the audience of the Lujiazui Forum in Shanghai that he sees China's consumer-price inflation below 2% this year, adding that the yuan exchange rate will remain stable.

The major regional equity indices nudged higher during Thursday's Asia-Pac session, with the major Chinese mainland indices leading the way higher. That outperformance came on the back of a call between the U.S. & Chinese commerce ministers, with Chinese state media noting that the two "agreed to promote the healthy development of pragmatic cooperation on trade and investment while properly handle differences. The two sides also agreed to maintain communication in their working relationship." Chinese equities also benefitted from U.S. President Biden's move to revoke Trump era executive orders targeting TikTok & WeChat, moving to a new order requiring security reviews of these apps (and others) in the jurisdiction of foreign adversaries. U.S. equity index futures have nudged higher after the S&P 500 & DJIA ticked lower on Wednesday.

Gold bulls haven't managed to force a sustained re-test of the $1,900/oz marker over the last 24 hours. Our weighted U.S. real yield measure is a touch higher over that horizon, after recovering from intraday lows on Wednesday, with the broader DXY tracing out a similar pattern, both of which would have played into bullion's pullback from its Wednesday peak. Spot last deals a few dollars softer around $1,885/oz, with the 20-day EMA providing the initial line of support.

WTI & Brent sit ~$0.40 below their respective settlement levels after finishing around neutral levels on Wednesday. 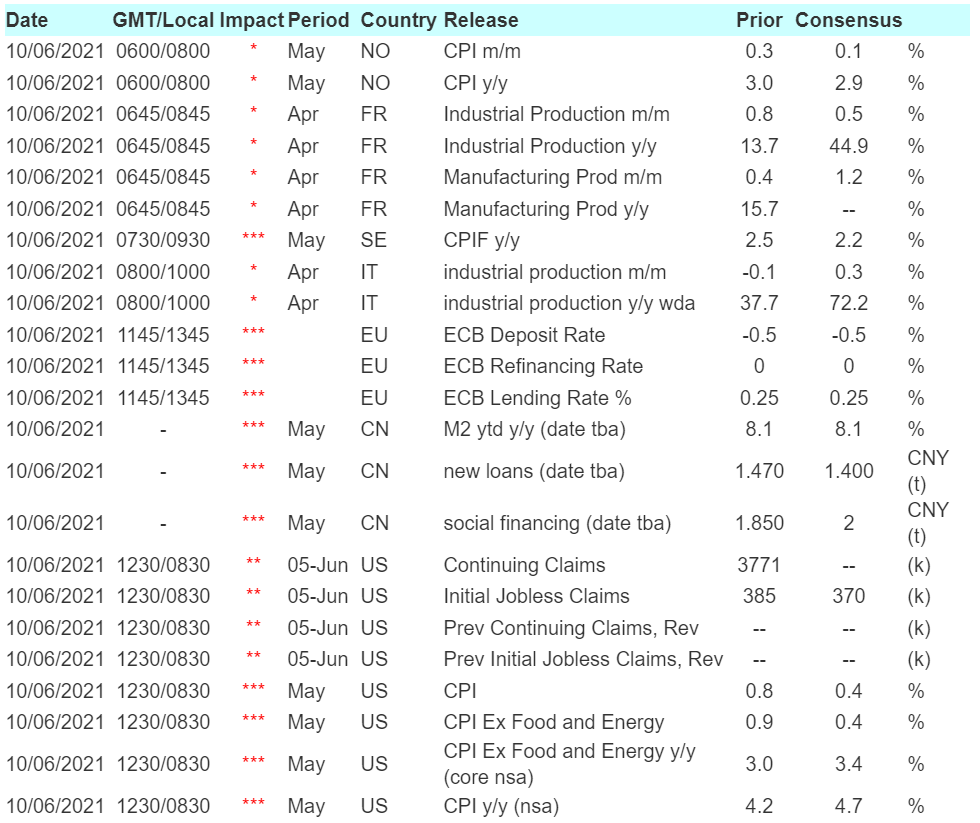