A greater sense of stability, which saw the Hang Seng briefly pare all of its early losses at one point, applied some light pressure to the U.S. Tsy space during overnight trade. That left T-Notes -0-04+ at 133-04 ahead of London dealing, while cash Tsys run little changed to 1.5bp cheaper across the curve, with 10s leading the way lower. There wasn't much in the way of notable market flow observed. 20-Year Tsy supply provides the focal point during Tuesday's NY session. Housing starts and building permits data will also cross in NY hours.

The kiwi went offered amid dovish RBNZ repricing inspired by a speech from Asst Gov Hawkesby, who signalled the Reserve Bank's cautious approach to raising the OCR, noting that "when there is a typical amount of uncertainty, and the risks are evenly balanced, then central banks globally tend to follow a smoothed path and keep their policy rate unchanged or move in 25 basis point increments." Market pricing no longer suggests that participants are sitting on the fence re: October monetary policy meeting. The OIS strip now prices exactly 25bp worth of tightening at the upcoming MPC gathering, which is tantamount to one standard sized OCR hike.

It was a bit of a topsy turvy Asia-Pac session for equities, with markets running in both directions, although the low base that Monday provided re: a relative comparison in stability allowed the market to feel a little more at ease, with e-minis moving further away from Monday's lows after Wall St. trade saw U.S. equities record their worst day in months.

GOLD: Some Stabilisation After A Breach Of Initial Support

Gold has hugged a tight range during Tuesday's Asia-Pac session, with spot last dealing little changed, just shy of $1,765/oz. This comes after the defensive tone, coupled with some stabilisation in U.S. real yields and the broader USD's pullback from best levels of the day, allowed bullion to regain some poise on Monday. Note that this came after a brief and limited foray bellow the recent lows during a holiday-thinned Asia-Pac session on Monday. Yesterday's low ($1,742.5/oz) now provides initial technical support ahead of the 76.4% retracement of the Aug 9-Sep 3 rally ($1,724.5/oz). Meanwhile, firm resistance remains located at the Sep 14 high ($1,808.7/oz). Participants await Wednesday's FOMC decision, with a particular focus on the central bank's language surrounding tapering matters.

OIL: Unwinding Some Of Monday's Losses

Crude has advanced since Monday's settlement, with WTI & Brent futures sitting ~$0.70-0.80 above their respective settlement levels, as e-minis move away from their Monday lows. 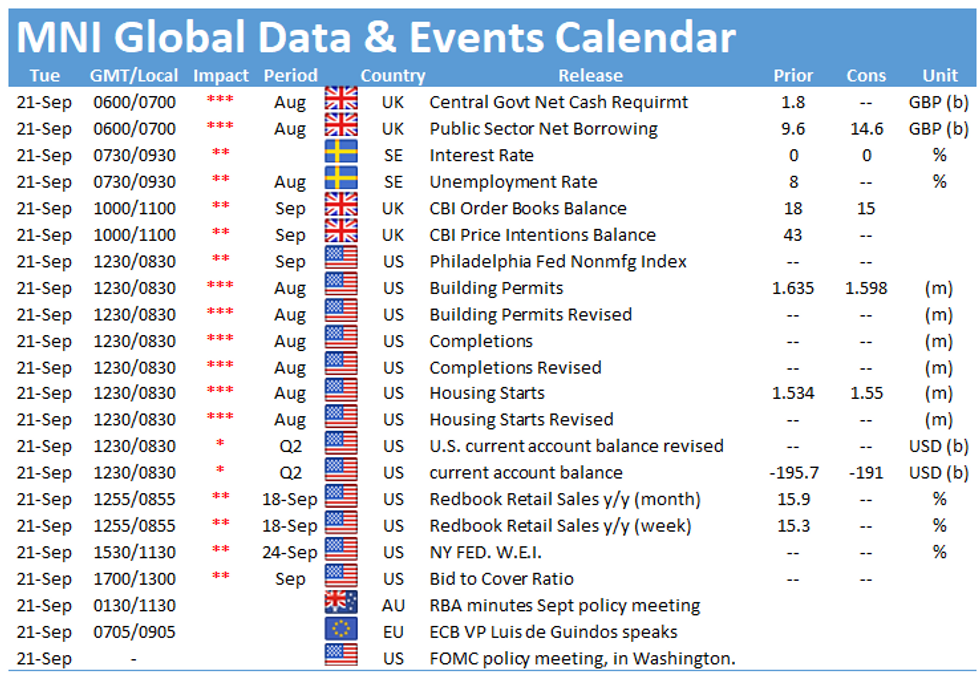