US$ Credit Supply Pipeline, May Running Total Nears $84B

U.S. Tsys garnered an early, modest bid in Asia-Pac trade, aided by Australia declaring a political boycott of the Beijing Winter Olympics & some cross-market spill over from strong ACGB supply. Still, firmer regional equities & e-minis tempered the bid (on hopes re: the severity of omicron and the Chinese policy easing dynamic). That leaves TYH2 +0-02+ at 130-13, off the peak of its 0-06+ overnight range. Cash Tsys run 0.5-1.5bp richer across the curve. 10-Year Tsy supply headlines the U.S. docket on Wednesday, with JOLTS job data also due.

A couple of questions have been received re: IBG2 contract activity this morning, with the contract last trading at 99.835. That looks like bad execution in a thin market shortly after the re-open. The bid/offer spread was 10bp wide at the time, with 1 lot trading there. The market has been quoted 99.925/99.935 for ~5 hours. A price of 99.835 implies an effective cash rate of 16.5bp come the end of February, a full 12.5bp above current levels, which would almost fully price a 15bp cash rate hike at the RBA’s February meeting. A reminder that the IB strip has softened a touch on the back of the previously flagged Terry McCrann article, which suggested that “after the latest RBA board meeting it is clear Australia is moving closer to a rate rise, not just potentially in 2023 but possibly even relatively early next year. Note that the OIS strip now prices ~15bp of tightening come the end of the Bank’s May ’22 decision, with McCrann’s article helping push OIS rates higher from May ’22 to further out the strip (albeit only incrementally for the May decision). 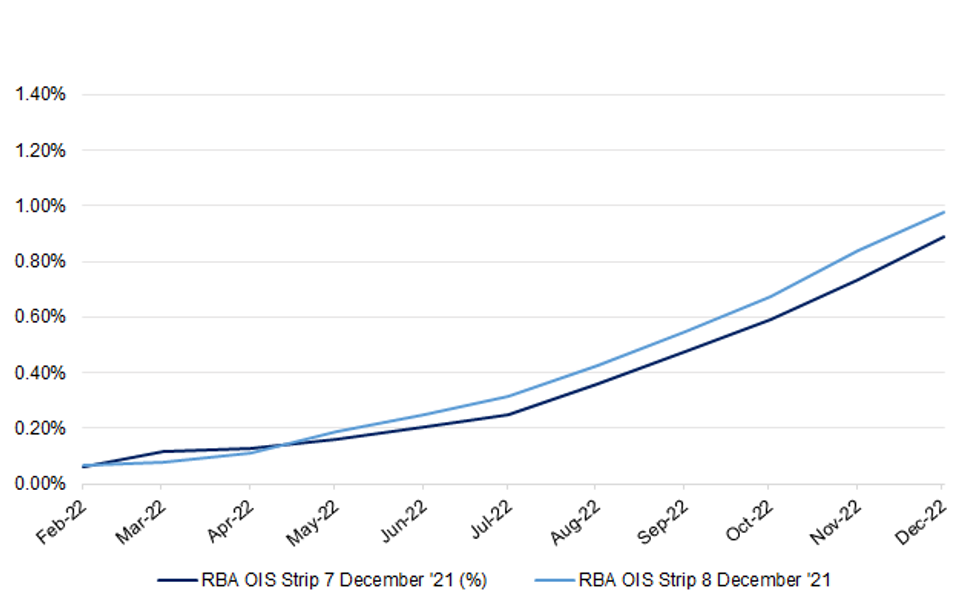 Offshore yuan surged to its best levels since 2018 on the back of expectations of further policy easing out of China and improving global risk environment. Fresh headline flow failed to provide much in the way of notable catalysts in Asia-Pac hours, with familiar risk-on factors taking centre stage as a result.

Further moderation in concern over the Omicron coronavirus variant and the prospect of more supportive measures from China's policymakers underpinned a risk-on environment, applying pressure to most USD/Asia crosses.

Regional equity indices & U.S. e-mini futures have mostly traded higher, as the impact of reduced worry re: the mortality threat posed by omicron and the combination of realised/potential for further policy easing in China continues to filter through into markets. A positive lead from Wall St. also helped set the tone for Asia-Pac trade, with the Nikkei 225, CSI 300 & ASX 200 all adding over 1%. The exception to the broader rule was the Hang Seng, which logged incremental losses as reports pointed to the impending tightening of restrictions when it comes to offshore financing for new Chinese tech firms (note that this isn’t a new concept). U.S. e-mini futures added 0.2-0.4%.

Spot last deals a handful of dollars higher at $1,790/oz, sticking to a tight range in Asia-Pac hours. Gold has firmed at the margin over the last 24 hours or so, with our weighted U.S. real yield monitor moving a little lower over that horizon (within the confines of the recent range), while the DXY’s move away from Tuesday’s peak allowed gold to build a base. Familiar technical parameters remain in place, with broader focus on Friday’s U.S. CPI reading.

OIL: Tight In In Asia

A tight range for WTI & Brent crude futures in Asia-Pac hours, with both operating ~$0.25 below their respective settlement prices after pulling back from best levels during Tuesday’s NY session. 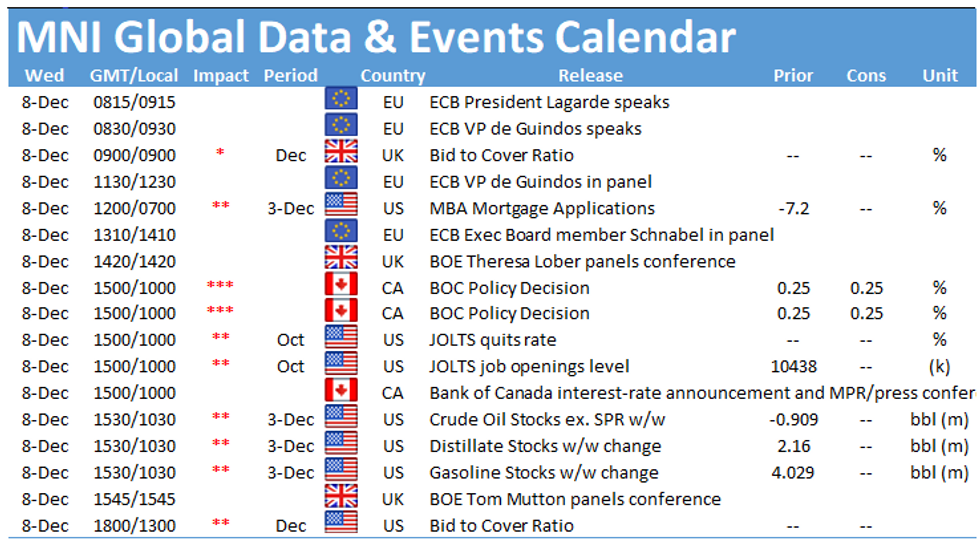