Friday morning kicks off with the publication of German industrial production at 0700GMT, followed by the EZ unemployment rate at 1000GMT. In the US the release of non-farm payrolls at 1330GMT is the highlight of the day.

Monthly industrial production in Germany is forecast to decelerate to 0.7% in November amid the renewed lockdown following October's strong reading of 3.2%. The industrial sector continues to recover from the initial slump at the beginning of crisis and another uptick in November would mark the seventh successive positive reading. October's report noted that output was 4.9% lower than in February. Germany's largest industrial sector, the automotive industry, grew by 9.9% in October and output is 6.0% lower than before the crisis. Survey evidence suggests that the manufacturing sector remains resilient. The manufacturing PMI rose further in December to a 34-month high, while the Ifo business climate indicator for the industrial sector increased markedly. Moreover, Destatis' truck toll mileage index, which is strongly connected to IP, ticked up again in November.

The EZ unemployment rate is forecast to edge slightly higher in November to 8.5%, up from 8.4% registered in October. The jobless rate rose modestly during the crisis as generous national job support schemes prevented a steeper rise of unemployment. Several countries prolonged their schemes which should keep the jobless rate in check in the coming months. Spain (16.2%), Cyprus (10.5%) and Lithuania (10.4%) showed the largest rates in October, while Malta (3.9%), the Netherlands (4.3%) and Germany (4.5%) saw the smallest unemployment rates.

US employment growth projected to slow

The U.S. economy likely added 50,000 jobs in December, according to market analysts, a sign that payrolls growth is continuing to slow from the outsized gains of the springtime and summer. In November nonfarm payroll employment rose by 245,000, while the unemployment rate ticked down to 6.7%. In December, the jobless rate is expected to edge slightly higher to 6.8%. The Bureau of Labor Statistics noted that the pace of recovery of the labour market has moderated in recent months. In November, jobs gains were recorded in transportation and warehousing, business services and health care, while employment declined in government and retail trade. Surging Covid-19 infections across the country and subsequent tightened restrictions should put downward pressure on service-sector job growth.

The only event scheduled on Friday is a speech by Fed Vice Chair Richard Clarida at the CFR. 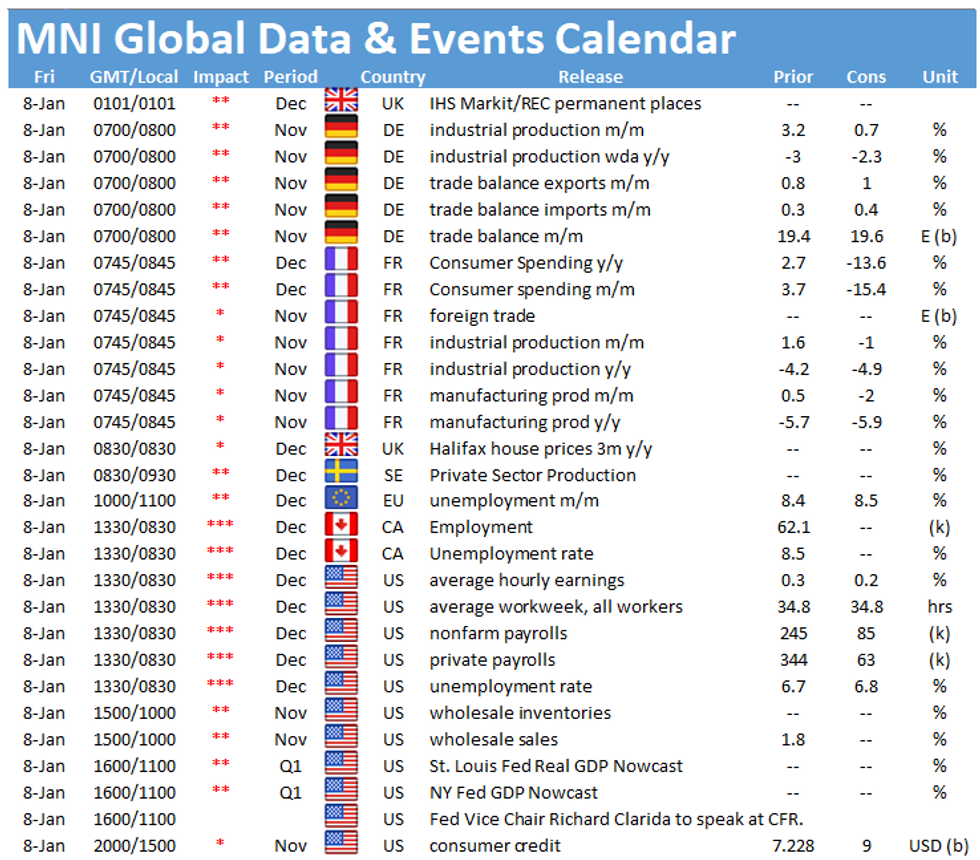