The Chicago Business Barometer increased markedly in July, led by a sharp uptick of the Production and New Orders sub-indices.

The Chicago Business Barometer rose in July, with the headline index jumping to 73.4 from 66.1 in June, driven by a sharp increase in output and new business. The index now stands at a two-month high and shows the second highest pandemic-era reading. 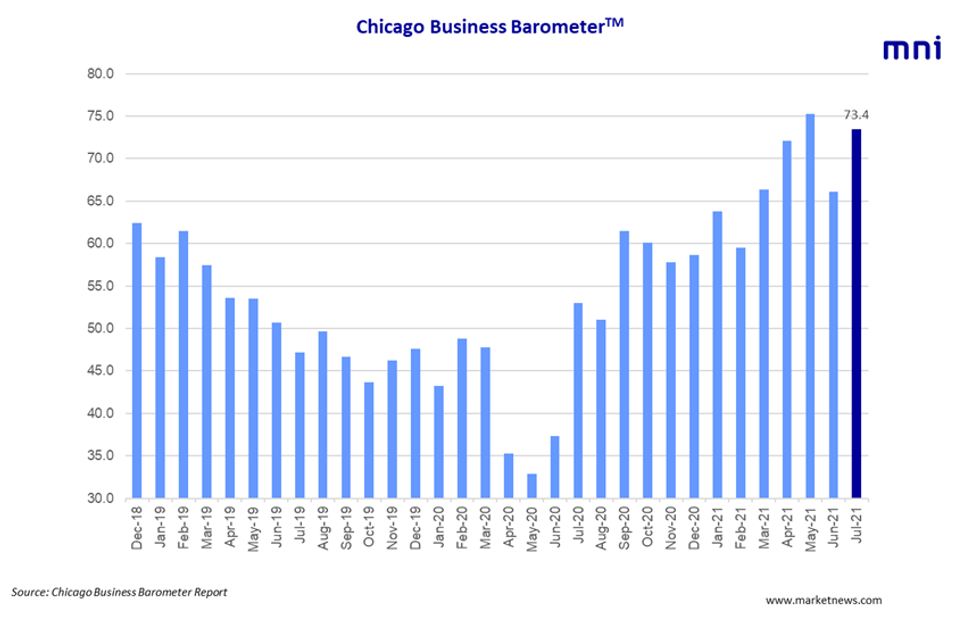 Production saw the biggest gain in July, up 8.8 points, as demand remained strong and some firms benefited from supply chain issues. The index now stands at 68.8, a two-month high. New Orders increased to 72.2 in July, up from 66.7, signalling strong demand.

Order Backlogs advanced 3.4 points, also hitting a two-month high of 70.0. Companies noted a lack of raw materials and warehouse personnel, leading to an increased backlog of work. Meanwhile, Inventories gained 5.1 points in July, rising to 42.6, although it has been in contraction since April.

Supplier Deliveries remained at June's level of 86.5 in July, still at the highest level since March 1974. Delivery delays and a lack of workforce availability remained a problem, firms noted. Prices paid at the factory gate eased slightly, down 0.3 points to 91.6 but remained at a historically high level. Higher prices for materials and freight were again a major concern for survey respondents.

This month's first special question asked, "What is your planned business activity growth forecast for the second half of 2021?" The majority (48.8%) expect growth to be between 5% and 10%. The second question asked, "Is your company looking at the current inflationary pressures as transitory; in agreement with the Fed?". The majority (37.2%) was unsure.