RRR Decision: One-off Cut Or Start of a Loosening Cycle? 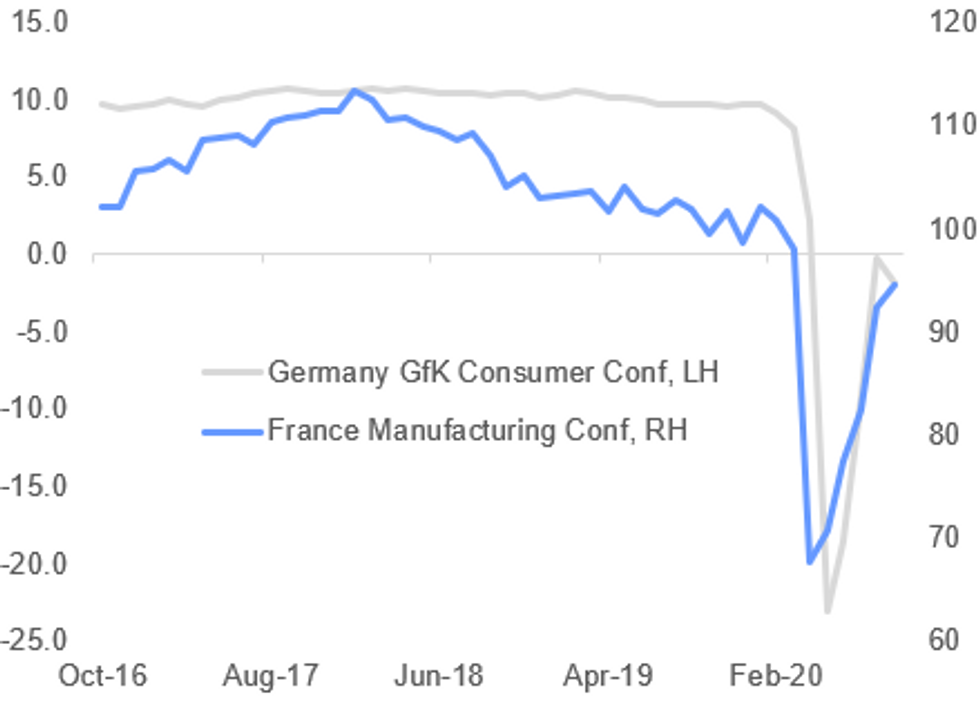 GERMANY/COVID (BBG): Germany should brace for a continued rapid spread of the coronavirus and the number of serious infections and deaths is sure to rise, the nation's RKI public health institute warned Thursday.Europe's biggest economy registered a record 12,331 new infections in the 24 hours through Thursday morning, according to data from Johns Hopkins University. That's the first time daily infections have exceeded 10,000 and took the total to 397,922."The general situation has become very serious," RKI President Lothar Wieler said at a news conference in Berlin, reiterating an appeal to citizens to respect distancing and hygiene rules.

SPAIN/COVID (BBG): The spread of coronavirus is out of control in certain parts of Spain, according to Health Minister Salvador Illa."We are in the middle of a second wave, it's no longer a threat but rather a reality," Illa said in an interview on Madrid-based Onda Cero radio. "In some parts of our country the epidemic isn't under control, so we need to take more drastic measures."Spain on Wednesday became the first country in Western Europe to surpass 1 million coronavirus infections, as authorities struggle to control fresh outbreaks and contemplate a curfew for the capital Madrid and its surrounding area.

BOJ: Japan's financial system is likely to remain highly robust, even under the scenario of a moderate economic recovery, the Bank of Japan's latest Financial System Report said. However, the FSR, published Thursday warned that the spread of Covid-19 and their "impact on the domestic and overseas economies are subject to considerable uncertainty" and that could lead to significant adjustments in financial markets and a "deterioration in financial firms' financial soundness".

BTPS: Bloomberg reporting that the final spread on the 30-year BTP syndication is now BTP+5bp (down from last update of BTP+7bp and IPT of BTP+10bp). Also reporting that books are over EUR80bln including EUR5bln of JLM interest.

UK DATA: As the level of 'lockdown' heightens across the UK, an not unsurprising trend was picked up in the latest Opinions and Lifestyles Survey for the Office For National Statistics, showing an increase in the number of people again working from home. The proportion of adults who travelled to work decreased by 5 percentage points, to 60%, according to the survey covering the period 14 to 18 October. Conversely, the proportion who worked from home increased to 25%, the highest since the beginning of August.

CHINA: Technology decoupling may deepen but economic decoupling from China will not be easy as the country has such strong manufacturing capabilities, said Ba Shusong, the chief China economist of Hong Kong Exchanges and Clearing (HKEX) and the chief economist of the China Banking Association at the Financial Street Forum 2020 on Thursday.

SWEDEN: Swedish businesses see activity increasing six months down the line, on balance, and they are investing in technology and research in anticipation of a 'new normal', the Riksbank's latest business survey found, as they are perhaps more upbeat than senior officials at the central bank.

Markets are far more stable Thursday after yesterday's cross-market volatility. GBP is softer as markets take profit on one of the strongest sessions for the currency in months. GBP/USD has inched back below 1.31, but losses are muted at this stage. UK/EU negotiating teams meet in London later today.

Equities are softer in Europe as well as futures in the US, with the e-mini S&P hitting new weekly lows in Asia-Pacific hours. The final Presidential debate between Trump and Biden takes place after the close Thursday, with polling averages still leaning heavily in favour of a blue wave at November's election.

The USD is clawing back some of the recent losses, with NZD and CAD also stronger. GBP, SEK and AUD are the poorest performers so far today.

A weak start for the space, with rising COVID numbers in Europe, continued uncertainty over US stimulus and ahead of tonight's presidential debate. 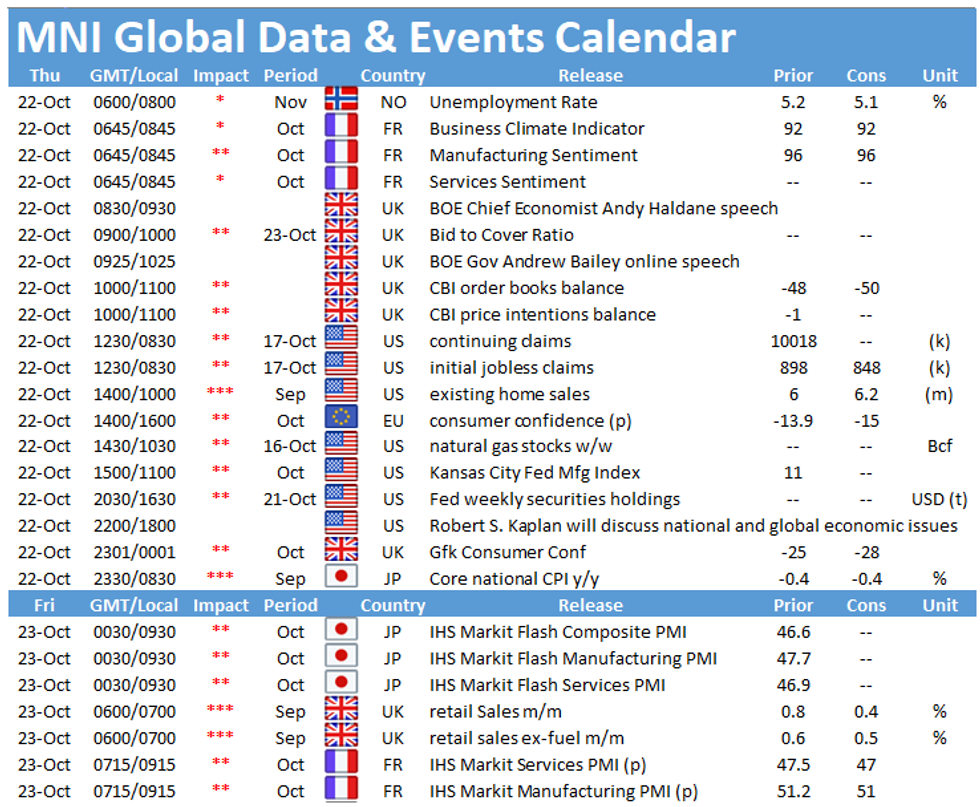