Flat In Asia After Two-Way Monday

Light Cheapening With Risk Tilted To On

MNI US OPEN: Stocks Still Under Pressure But Off Overnight Lows 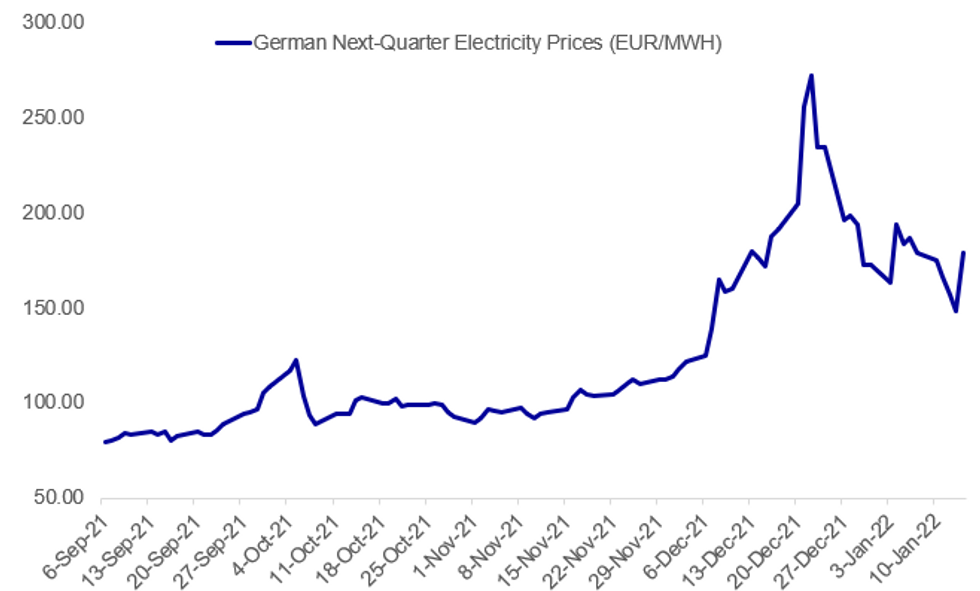 GERMAN DATA (BBG): Germany’s economy contracted by as much as 1% in the final quarter of 2021 as the emergence of the coronavirus’s omicron strain added to drags on output from supply snarls and the fastest inflation in three decades.Gross domestic product shrank by between 0.5% and 1% in the three-month period, the Federal Statistics Office said Friday at a briefing. For the year as a whole, it advanced 2.7%, in line with expectations.

UKRAINE/RUSSIA (BBG): Ukraine said a cyberattack brought down the websites of several government agencies for hours. Authorities didn’t immediately comment on the source of the outage, which comes as tensions with Russia surge over its troop buildup near the border. “Some government websites, including the Foreign Ministry and Education Ministry, came under hacker attack overnight,” the State Security Service said Friday. Ukraine has previously accused Russia of mounting major cyberattacks against it as relations between the two neighbors have worsened since a 2014 conflict. In recent months, Ukraine and its allies in the U.S. and Europe have warned that Russia could be preparing to invade as it massed about 100,000 troops near the border. Moscow denies any such plans.

EUROPE ENERGY (BBG): French and German electricity prices jumped after Electricite de France SA revised down the production forecast for its nuclear fleet that’s vital to keep the lights on in Europe. The world’s biggest producer of nuclear power reduced its estimate by about 8% after finding defects at some reactors. It’s another blow to Europe which is already facing an historic energy crisis with natural gas stocks at their lowest in more than a decade for this time of year. The German February contract rose as much as 22% to 235.50 euros ($270.07) a megawatt-hour while the contract for the next quarterclimbed as much as 23% to 183 euros on European Energy Exchange AG. French contract for April to June delivery added as much as 24% to 191 euros.

COVID (BBG): The omicron coronavirus variant causes less severe disease than the delta strain even in those who are unvaccinated or who haven’t had a prior Covid-19 infection, a study from South Africa’s Western Cape province showed. The research in the region where Cape Town is the capital compared 11,609 patients from the first three waves of infection, the most recent of which was caused by the delta variant, and 5,144 patients from the latest omicron-driven wave.

BANK OF KOREA (MNI STATE OF PLAY): The Bank of Korea on Friday raised its policy interest rate to the pre-pandemic level of 1.25% amid persistent concerns over inflation and financial imbalances as it keeps a close eye on the impact of the Omicron variant spread. "The Board will appropriately adjust the degree of monetary policy accommodation as the Korean economy is expected to continue its sound growth and inflation to run above the target level for a considerable time, despite underlying uncertainties over the virus," a statement released by the BOK said.

UK GDP jumped by 0.9% in November, far outpacing forecasts of a 0.4% rise, taking output 0.7% above the pre-Covid-19 level seen in February 2020, the Office for National Statistics said Friday. Services rose by 0.7%, adding 1.05 percentage points to total output. Education and retail were particularly strong, but services were robust across the board, according to an ONS official.

Manufacturing rose by 1.1% in November, lifting total production by 1.0%, despite a 1.3% decline in mining and quarrying.

Construction jumped by 3.5%, as shortages of materials that contributed to a sharp fall in October “eased slightly,” according the official. Mild November weather also lifted the sector.

External trade was in surplus in November, to the tune of GBP626 million, up from GBP151 million in October, the biggest surplus since August 2020, the Office for National Statistics said Friday.

As has been the case since the UK left the transitional trading arrangement with the European Union at the tart of the year, non-EU imports exceeded incoming shipments from the EU, with the gap widening to GBP3.8 billion, the highest of any month in 2021. Fuel imports accounted for much of the increase.

Core fixed income is off of yesterday's highs and futures have broadly retraced a bit over half of yesterday's moves higher. The Treasury and gilt curves have done this as part of a parallel shift while the German 2s10s curve has bear steepened.