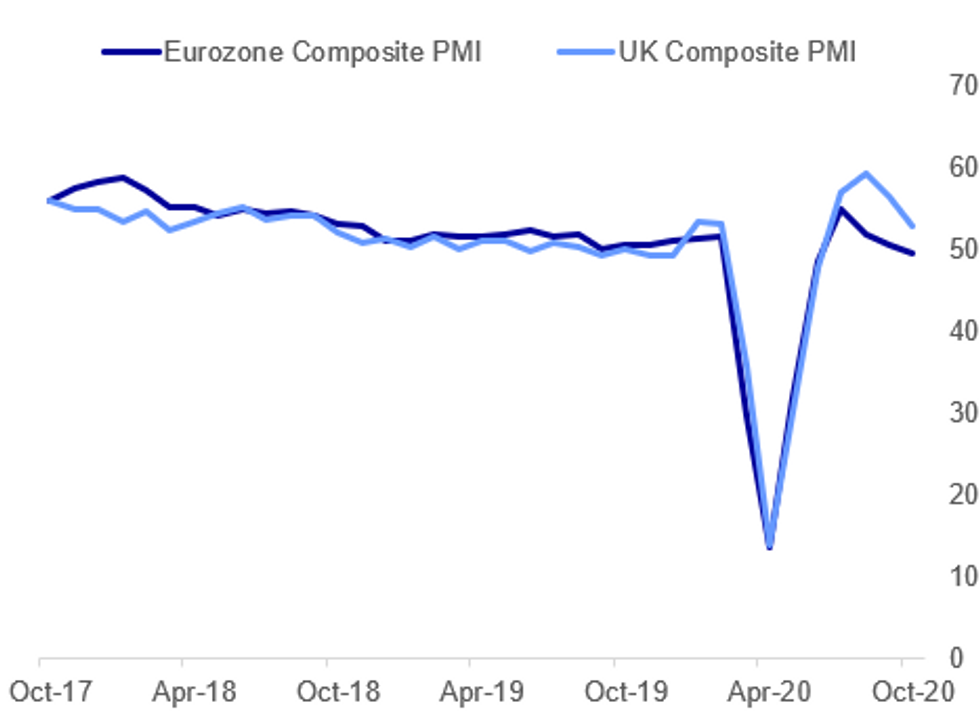 EUROZONE DATA: Highlights from the PMI press release* "Germany was the only bright spot, as France and the rest of the region as a whole fell deeper into decline."* Outside of Germany and France "business activity fell for a third month in a row, with the pace of decline running at the fastest since early-2013 barring the height of the pandemic. A solid expansion in manufacturing output was more than offset by an increased rate of contraction in services."* "Looking at price trends, deflationary pressures moderated during October. Average prices charged for goods and services fell for an eighth month running, but the rate of decline eased to the slowest seen over this period."

UK DATA: Most of the commentary is as expected in the UK PMI release, perhaps most noteworthy is: "October data indicated a steep fall in employment numbers, with another month of deep job cuts signalled in both the manufacturing and service sectors. Lower staffing numbers were primarily widely attributed to redundancies and the need to reduce operating costs amid shrinking customer demand."

GERMANY DATA: "A sharp rise in manufacturing backlogs of work – the steepest since December 2017 – more than offset a further (albeit slower) fall in work-in-hand at services providers in October. It meant that overall outstanding business increased for the third month in a row, with the rate of accumulation accelerating to the fastest for two-and-a-half years." - from Markit PMI press release re the manuf beat

COVID (BBG): European governments began to deploy curfews more widely, as the coronavirus pandemic gained momentum across the continent and France reported more than 40,000 new cases for the first time. Daily infections are hitting records around Europe, and cases in France surged by 41,622 Thursday. Against that backdrop, authorities are expanding a curfew beyond Paris and other large cities, with some 46 million people told to stay at home from 9 p.m. to 6 a.m. starting Friday at midnight.

COVID (BBG): The U.S. Food and Drug Administration approved Gilead Sciences Inc.'s antiviral therapy remdesivir on Thursday, making it the first drug to obtain formal clearance for treating the coronavirus. Regulators had granted an emergency-use authorization for remdesivir earlier this year, and since then the drug has become a widely used therapy in hospitalized Covid-19 patients. It was given to President Donald Trump this month when he was diagnosed with the virus. Shares of Gilead gained 6.3% in pre-market trading on Friday.

ITALY/RATINGS: Sell Side Thoughts Ahead Of S&P's Sovereign Review Of Italy
Sell side thoughts on S&P's sovereign credit rating review of Italy (current rating: BBB; Outlook Negative), scheduled for release after hours today.
* Commerzbank: We exp. S&P to stay put. S&P has notably lagged Moody's & Fitch after lowering Italy's outlook to -ve two years ago. Gov't projections for the '21 deficit & debt ratio do not show the steep decline anticipated prev. S&P itself has been outspoken on the impact of the NGEU agreement, considering it "a key step toward a fiscal union" and the EU's spectacular debut issuance this week should add conviction.
* Danske Bank: We do not expect that a downgrade despite the sig. rise in debt/GDP on the back of COVID. There will be focus on the support from the EU through the recovery fund & SURE, as well as historical low funding costs for Italy.
* Unicredit: We exp. no rating change. Italy's borrowing conditions have continued to improve, which is exp. to mitigate potential risks to public finance sustainability. The ECB has played a key role & it is likely to continue to provide a backstop for additional public borrowing. S&P is likely to highlight that NGEU might mitigate the risk of a weakening of Italy's medium-term growth. Other indicators will also feature e.g. the favourable net-external-creditor position & low levels of private debt.

CHINA (MNI INTERVIEW): The recent appreciation of the yuan has been driven by factors which may not be sustained, including China's rising current account surplus and relatively swift recovery from the Covid-19 pandemic, People's Bank of China Monetary Policy Committee member Ma Jun told MNI. For full story contact sales@marketnews.com

UK DATA: Retail sales rose 1.5% in Sep, beating market forecasts looking for a gain of just 0.2%. This marks the fifth consecutive gain since the indicator plunged at the beginning of the pandemic. Ex-fuel sales were up 1.6%, following Aug's reading of 0.6%. Total sales are now 5.5%
above Feb's level, while ex-fuel sales are 7.0% higher. Retail sales in the three months to Sep surged 17.4%, showing the largest increase on record. Sep's uptick was driven by another gain in non-food store sales, rising 4.0% in Sep. The ONS noted that most stores have now recovered to pre-pandemic levels with spending on home improvement and gardening items doing particularly well. Food stores and online retailers have also fared especially well. The proportion of online sales was at 27.5% in Sep, compared to 20.1% in Feb, despite small monthly declines. However, clothing and fuel sales continue to record sales volumes below Feb's level as consumers continue to work from home and reduced the amount of travels. Clothing sales were still 12.7% lower than in Feb, while fuel were down 8.6% compared to pre-crisis levels.

JAPAN: Japan's Sumitomo Life Insurance company will look to increase its holdings of longer-dated Japanese government bonds and foreign credit assets over the next 6 months, the company's chief fund manager said Friday. As for hedged foreign assets, Sumitomo Life is focused mainly on high-credit corporate bonds as it seeks higher return than from government bonds. The company increased foreign bond holdings by JPY470 billion in the six months through end-September to JPY10.3 trillion, 30.6% of its total assets and says it will be 'flexible' to future investments, watching currency and interest rate developments. The firm also increased foreign stock holdings by JPY220 billion to JPY1.65 trillion in the April-September period.

The rally in BTPs has been the story of the morning. There have been some big buy orders in both the cash and futures markets that have helped push BTPs higher with some speculation that the orders may be ahead of the S&P Italy rating decision which is due after hours tonight, hoping for the BBB negative outlook rating to remain unchanged.

The USD is weaker, but in a range, early Friday, with most major pairs bouncing after early weakness in Asia-Pac hours. EUR/USD bottomed out at 1.1787 but has rallied smartly since to trade just shy of 1.1850 at the NY crossover. The final Presidential debate provided little new, with both candidates sticking to recent rhetoric and offering much heat, but little light.

Global prelim PMI numbers for October continue to show a far swifter recovery for the manufacturing sector over services, with the Eurozone manufacturing component topping expectations while services fell short of forecast.

AUD is outperforming modestly, prompting a new weekly high in AUD/USD as October PMIs showed both the services and manufacturing sectors bouncing well. The 50-dma is now within reach at $0.7199.

Focus turns to US PMI data after the opening bell as well as speeches from ECB's Villeroy and BoE's Ramsden.

A constructive start for global equities, particularly in Europe, where financials are outperforming (following better than expected earnings from Barclays and Nordea).

A mixed performance so far Friday, with precious metals gaining a bit of ground on a marginally weaker dollar. 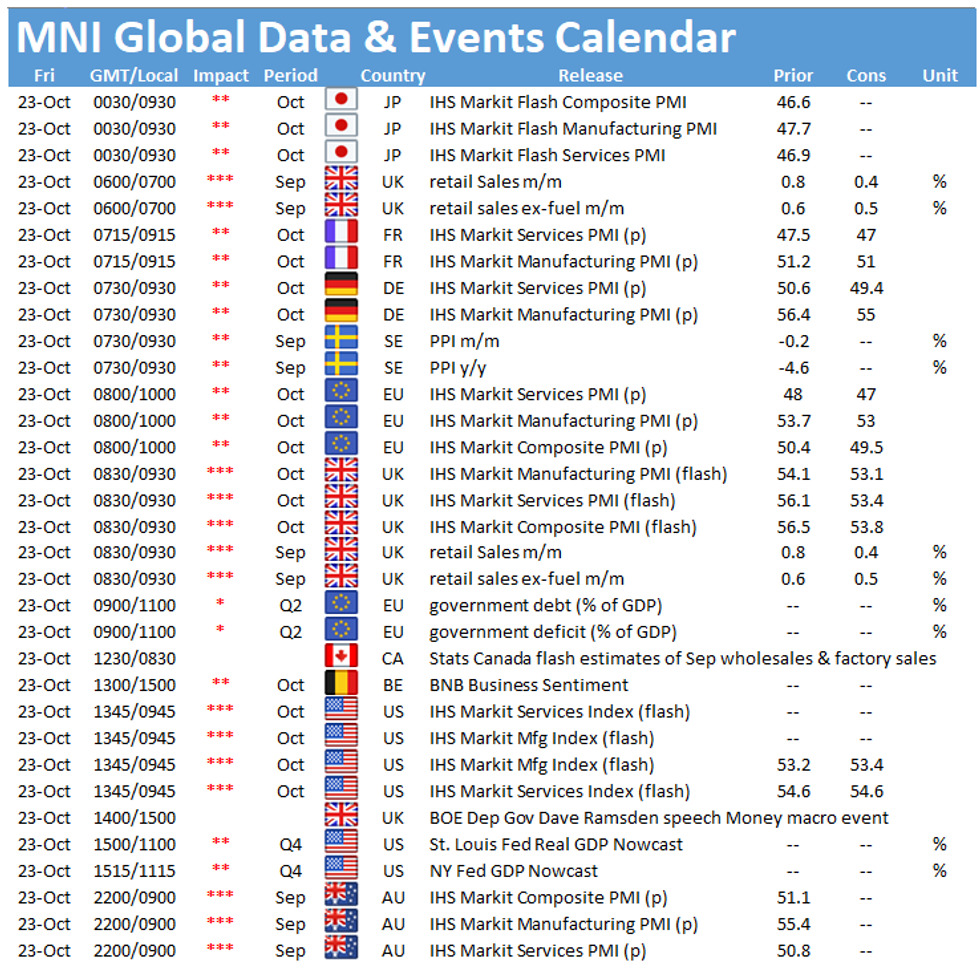