MNI INTERVIEW(RPT): Andolfatto Says Fed Must Be Ready to Hike

MNI INTERVIEW(RPT): Andolfatto Says Fed Must Be Ready to Hike 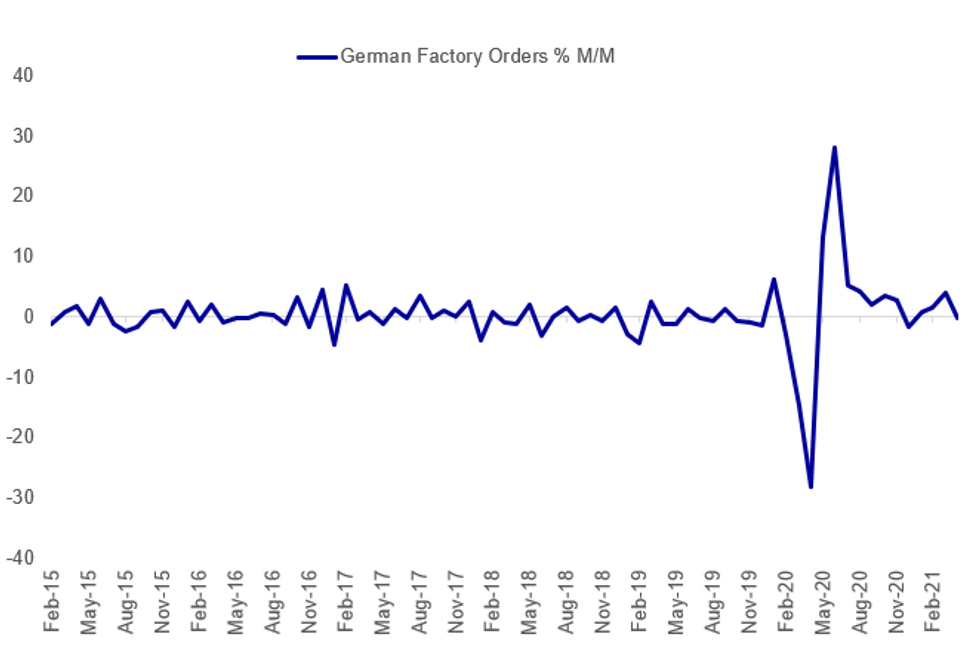 GERMAN DATA (RTRS): German industrial orders dropped unexpectedly in April on falling domestic demand, data showed on Monday, as supply chain disruptions held back manufacturers in Europe's largest economy. The Federal Statistics Offices said orders for industrial goods fell by 0.2% in seasonally adjusted terms, the first drop this year after three successive increases. The reading confounded a Reuters forecast of a 1.0% rise and came after an upwardly revised increase of 3.9% in March. A breakdown of the data showed that domestic demand fell by 4.3% while foreign demand rose by 2.7%.Both consumer and capital goods posted an increase while intermediate goods contracted by 1%, the data showed.

U.S. (BBG): In case you missed over the weekend... Treasury Secretary Janet Yellen said President Joe Biden should push forward with his $4 trillion spending plans even if they trigger inflation that persists into next year and higher interest rates. "If we ended up with a slightly higher interest rate environment it would actually be a plus for society's point of view and the Fed's point of view," Yellen said Sunday in an interview with Bloomberg News during her return from the Group of Seven finance ministers' meeting in London.

UK DATA (BBG): U.K. house prices grew at their strongest pace in almost seven years as consumers unleashed pent-up savings to gain more space after coronavirus lockdowns, Halifax Building Society said.Prices grew 1.3% in May, driving the annual pace of growth to 9.5%, the mortgage lender said in a statement on Monday. That put the average cost of a home at 261,743 pounds ($369,895).

CHINA DATA: China's exports rose 27.9% y/y in May driven by growing demand from European countries and the U.S. and greater shipments of labour intensive as well as mechanical and electrical products although the pace slowed from the 32.3% rise recorded in April, data from the General Administration of Customs showed on Monday.

FIXED INCOME: Looking ahead to Thursday

Core fixed income has been under a little pressure this morning, but markets are already starting to focus on events later this week with US CPI and the ECB monetary policy decision on Thursday both key events for the market.

A calmer start for FX as we start the week and attention turning squarely towards ECB meeting and US CPI, both released on Thursday.