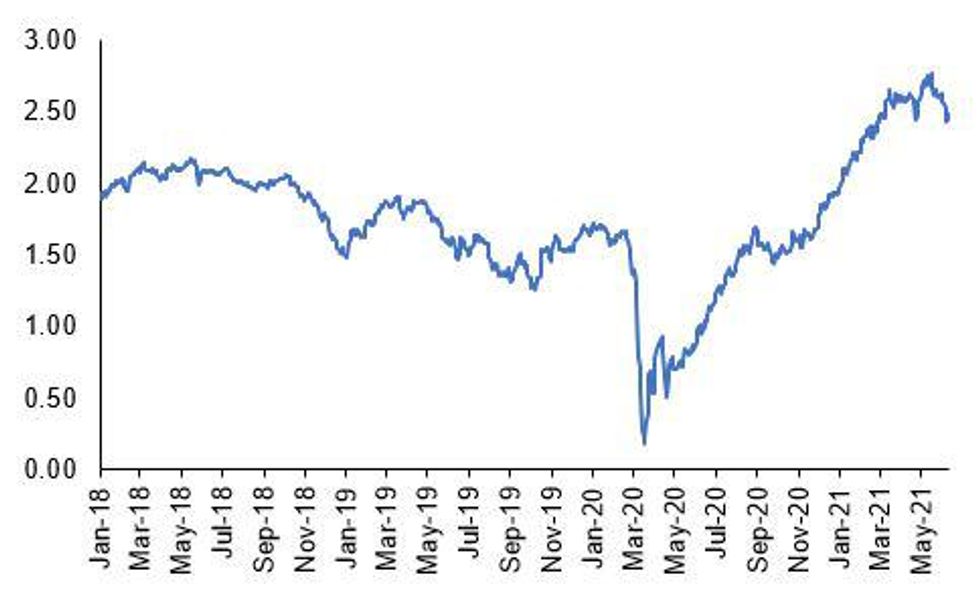 US-CHINA (MNI): Blinken, Yang Hold Testy Phone Call With G7 Ongoing
Following a phone call earlier today between US Secretary of State Anthony Blinken - who is in the UK for the G7 summit - and senior Chinese diplomat Yang Jiechi, the former tweets: "Constructive discussion today with the People's Republic of China Director Yang Jiechi on pressing global issues. We will continue to conduct practical, results-oriented diplomacy with Beijing on global challenges."

US-RUSSIA (MNI): NBC To Air Interview w/President Putin, First On US TV In Three Years
NBC has announced that it will broadcast an exclusive interview:http://press.nbcnews.com/2021/06/11/nbc-news-world... with Russian President Vladimir Putin, his first on US television in over three years.

UK (MNI): Sunak: BOE Responsible For Reserve Remuneration
Chancellor of the Exchequer Rishi Sunak, in a written response to the Lords Economic Affairs Committee, said that the UK Treasury is not considering ending remuneration of central bank reserves and that it was a matter for the Bank of England. Sunak said that the idea of ending reserve remuneration, an idea floated by some high profile economists, such as former Monetary Policy Committee member Charles Goodhart, "is not one that is being considered by the Treasury" adding that "the independent MPC has sole responsibility for the operation of monetary policy."

EUROPEAN UNION (MNI): MNI SOURCES: Higher Chance EU Debt Rules Significantly Eased
A European Commission signal that it will continue to go easy on high-debt states through at least 2023 gives more time for a major overhaul of the European Union's Stability and Growth Pact and raises the chances that national borrowing limit rules will be significantly loosened, officials told MNI.

EUROZONE (MNI): Fiscal-MonPol Cooperation Vital, New Book Argues
Europe and the European Central Bank have come of age as a result of the Covid-19 crisis, a new book co-authored by the ECB's Director General of Monetary Policy argues:https://global.oup.com/academic/product/monetary-p..., thanks not least to the "disposition towards pre-emptive action, a playbook for implementing unconventional policy in short order," left behind by the 2008 financial crisis.

From the report: "Rising inflation remained a top concern of consumers, although the expected rate of inflation declined in early June. Spontaneous references to market prices for homes, vehicles, and household durables fell to their worst level since the all-time record in November 1974. These unfavorable perceptions of market prices reduced overall buying attitudes for vehicles and homes to their lowest point since 1982. These declines were especially sharp among those with incomes in the top third, who account for more than half of the dollar volume of retail sales."

An all-time record number of consumers anticipating a net decline in unemployment
The expected year-ahead inflation rate declined to 4.0% in early June, although down from 4.6% in May, it was still higher than any other time in the past decade.

UK (MNI): Trade Gap Falls As Non-EU Imports Outperform
The UK's April headline trade deficit narrowed to GBP0.935 billion from GBP1.966 billion as EU imports remain weak after the UK left the transitional trading period with the EU at the end of 2020. Imports from non-EU countries hit GBP20.1 billion, topping the GBP 18.4 billion from EU nations, extending a trend that began in January. Exports to the EU rose by 2.0% in April, but remain 5.1% below the level of December (compared to a 7.0% shortfall in March).

UK (MNI): UK GDP Higher In April As Services Reopen
UK output rose by 2.3% between March and April, a shade below expectations, powered by a higher-than-forecast 3.4% jump in services as non-essential shops, outdoor dining and personal services reopened on 12 April, the Office for National Statistics said:https://www.ons.gov.uk/economy/grossdomesticproduc.... Services accounted for 2.87 percentage points of total growth, led by a 8.9% surge in wholesale and retail trading, the biggest rise since June of 2020.

US TSYS SUMMARY: Ending The Week On A Soft Note

USTs have gradually sold off through the session with yields holding near the weaker end of the day's range.