Labour market data due at 7:00BST

The Liquidity Condition Index picked up to 42.9 in December from the previous 38.9, with 64.3% of the traders reporting conditions little changed from November.

The higher the index reading, the tighter liquidity appears to survey participants. 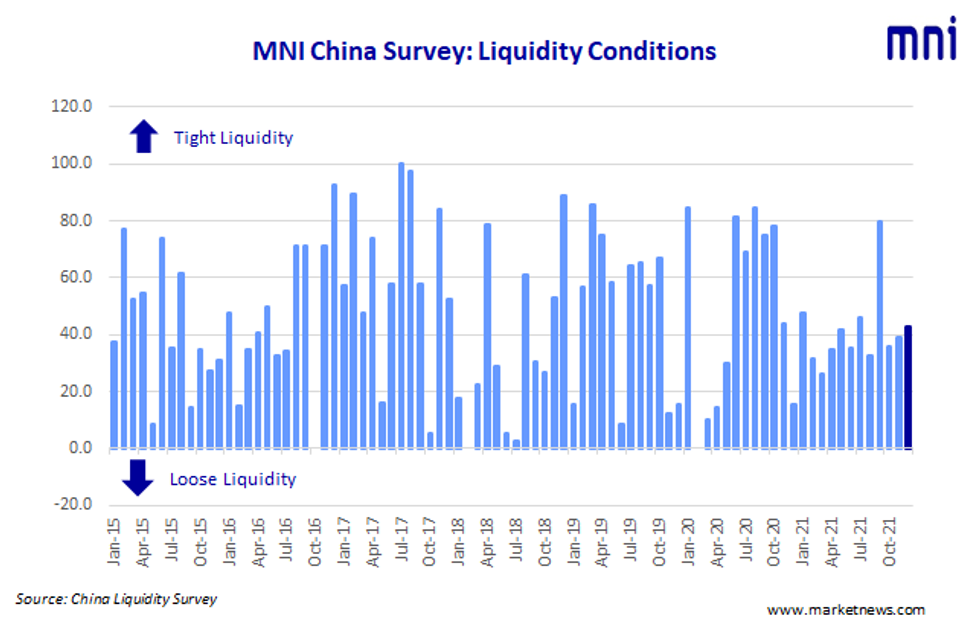 One trader with a state-owned bank based in Nanjing told MNI the People’s Bank of China would keep liquidity ample through month-end, meeting all the normal cash demands.

The PBOC conducted CNY500 billion MLF in December, draining CNY450 billion from the market after offsetting the CNY950 billion of maturities, draining another net CNY350 billion via its open market operation as of Dec 20, MNI calculated.

Against that, the reserve requirement ratio (RRR) cut effective on Dec 15 released around CNY1.2 trillion into the market.

The Economy Condition Index slid to 8.9 in December from last 14.8, with 82.1% traders expressing concern over the economy, with one Beijing-based trader expressing surprise that retail sales missed expectations in November.

But there was some optimism, with one trader at a commercial bank looking for a boost from government support measures.

Retail sales, slowed to 3.9% y/y in November from 4.9% y/y in October, the second lowest reading this year.

The PBOC Policy Bias Index was 41.1 in December, slightly up from the 40.7 in November, with 82.1% of participants saying current policy will be well implemented.

One senior trader with top bank in Beijing told MNI the central bank would likely look to ease the transition between phases of the economy, keeping policy direction clear.

The Guidance Clarity Index was 53.6 in December, barely changed from 53.7 in December, with 92.9% of the traders seeing clear signals or messaging from the central bank’s move.

The 7-Day Repo Rate Index edged up to 78.6 from 74.1, with 64.3% of the participants predicting a higher rate before year-end. The 7-day weighted average interbank repo rate for depository institutions (DR007) closed at 2.0449% Tuesday.

Following Monday’s surprise LPR cut, MNI asked survey respondents whether another rate cut was possible. A total 53.6% participants saw it as likely to see another policy or market rate-cut while 25.0% didn’t.

“Current rates are appropriate, more cuts are not necessary as the critical problem is there’s not sufficient capital demands rather than high rates,” one trader said.

The MNI survey collected the opinions of 28 traders with financial institutions operating in China's interbank market, the country's main platform for trading fixed income and currency instruments, and the main funding source for financial institutions. Interviews were conducted Dec 6 – Dec 17.