EGB/Gilt: Ending The Week On A Soft Note

(K1) Breaks Out Of Its Recent Range

The Chicago Business Barometer declined in February, with the headline index slipping 4.3 points to 59.5, driven by a sharp fall in demand and production. The decrease was stronger than financial market expectations. 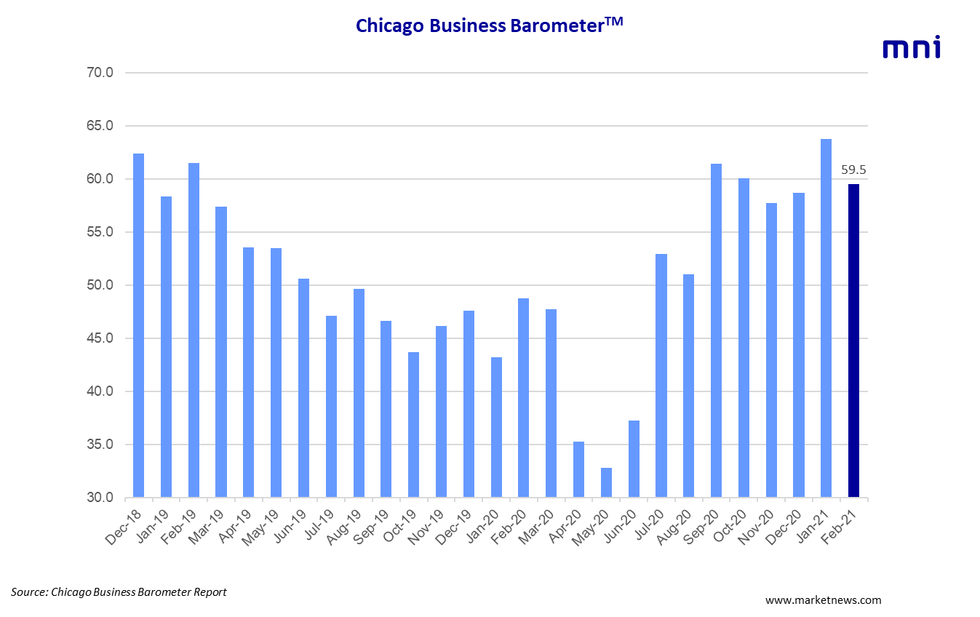 Demand eased markedly in February with New Orders dropping 11 points to 55.2, its lowest level since August 2020. Similarly, Production shed 9.3 points to 62.0, following two consecutive months of gains. Anecdotal evidence provides a mixed picture, with some firms experiencing a downturn due to the pandemic, while others report strong consumer demand.

Order Backlogs edged higher for the fourth consecutive month in February. The index now stands at 63.0 which is the highest level since October 2017. Meanwhile, Inventories declined from 55.1 to 50.4 in February but remained in expansion territory with firms stating that logistical issues require an increase in stocks.

Employment rose 5.7 points to a sixteen-month high of 49.1. The index has been in contraction territory since July 2019, despite the demand for blue collar workers.

Supplier Deliveries inched up 71.5, its highest level since May and recorded the third highest reading since the start of the pandemic. Prices paid at the factory gate edged marginally higher to 75.3, up 0.1 points, reaching the highest level since September 2018. Companies again noted price increases for raw materials, especially tin.

This month's special question asked, "How did you cope with disruption this past year?" The majority, at 41.7%, increased their safety stocks, while 22.9% of respondents either implemented new technology or diversified suppliers. The second question asked, "Has your organization decided to require your workforce and contingent labor to be vaccinated?" The majority, at 87.2%, was undecided when asked.

This month's survey ran from February 1 to 15.