MNI US OPEN: BoE Set To Hike On "Super Thursday"

Fig. 1: Spain, Italy PMIs Much Weaker Than Expected In January 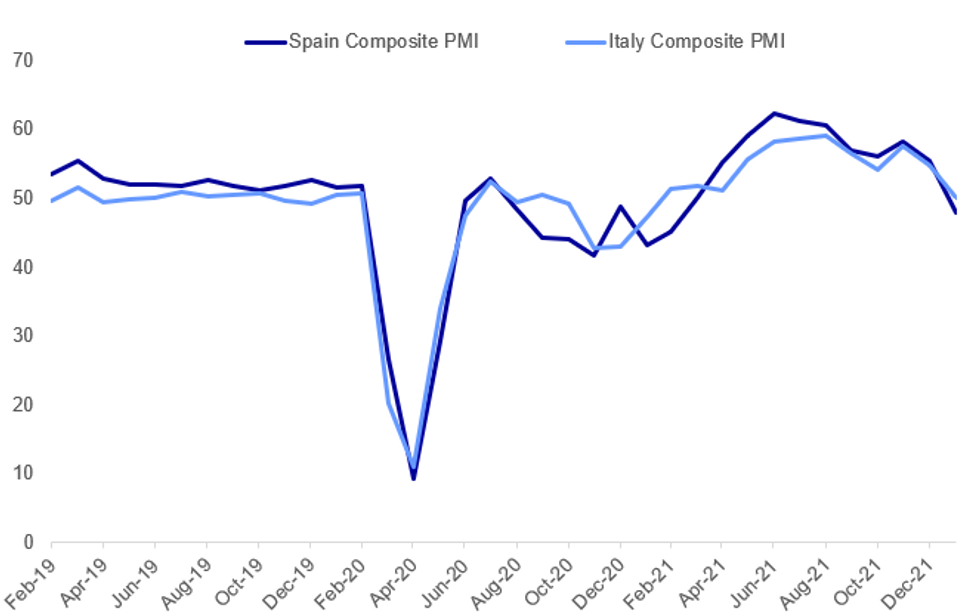 BANK OF ENGLAND: The BOE policy decision, Minutes and MPR are all due for release at middayGMT with a press conference at 12:30GMT. The MNI Markets team expects a 25bp hike this week, along with the 26 sell-side analysts in our survey. Assuming a hike, the gilt maturing in March will almost certainly not be reinvested. For the full MNI Preview including summaries of 26 sell-side analyst views and the questions for MNI Instant Answers, click here.

EUROPEAN CENTRAL BANK: The ECB policy decision will be at 12:45GMT (i.e. during the BOE press conference) with the ECB press conference due at 13:30GMT. Given the policy announcements in December, no material policy innovations are expected at the February meeting. However, today's meeting will present a communication challenge for the ECB as it attempts to affirm the baseline scenario (subsiding inflation this year, no near-term rate hikes) at a time when the Fed and BoE have become more hawkish and inflation fears have been rising globally. For the full MNI Preview, click hereFor the full MNI Preview, click here.

UK/EU/N IRELAND: Speaking to RTE's Morning Ireland, European Commissioner Mairead McGuinness states that the proposed halting of some checks on goods coming into Northern Ireland from the British mainland is an 'absolute breach' of international law. * McGuinness states that "It's very unhelpful. We're working tirelessly with the UK to find solutions." Adds that she will hold a call with Commissione rMaros Sefcovic and UK Foreign Secretary Liz Truss on the issue later today.

RUSSIA-NATO (AP): NATO Secretary-General Jens Stoltenberg expressed concern Thursday that Russia is continuing its military buildup around Ukraine, and that it has now deployed more troops and military equipment to Belarus that at any time in the last 30 years.Russia now has more than 100,000 troops stationed near Ukraine’s northern and eastern borders, raising concern that Moscow might invade again, as it did in 2014, and destabilize the Ukrainian economy. Russian officials deny that an invasion is planned.“Over the last days, we have seen a significant movement of Russian military forces into Belarus. This is the biggest Russian deployment there since the Cold War,” Stoltenberg told reporters at NATO headquarters in Brussels.

RUSSIA-US (RTRS): The deployment of additional United States troops in Eastern Europe is escalating tensions in the region, the Kremlin said on Thursday, after Washington said it would send 3,000 extra troops to Poland and Romania. Russia has amassed tens of thousands of troops near the borders of Ukraine, demanding that the United States and NATO promise not to allow Kyiv join the Western military bloc, but denying any plans to invade its neighbour. The White House said this week extra troops would shield Eastern Europe from a potential spillover from the Ukrainian crisis.

FED: Fed Governor nominees Raskin, Cook and Jefferson are due to testify before the House at 13:45GMT. The pre-released initial comments from the three didn't reveal any major talking points with a summary provided by our policy team here.

It's a huge day for markets with both the BOE and ECB meetings due this afternoon as well as the three Fed nominees testifying before Congress.

COMMODITIES: Weaker Across The Board